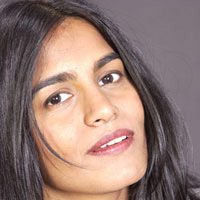 I was born in and grew up in Mumbai. My schooling was in Mumbai and Panchgani. Professionally I received a Masters degree in Hindustani vocal music from SNDT University in Mumbai.

Indians are smart, and if you look at the history of Indian music, most of the names we remember are people who were world-class – in classical music Kishori Amonkar, Ustad Aamir Khan, Pandit Ravi Shankar – in film music Lata Mangeshkar, Kishore, Rafi, Mukesh – in ghazal Begum Akhtar, Mehdi Hassan, etc. 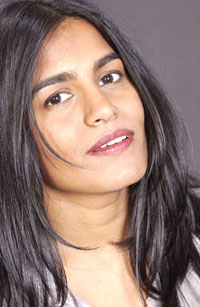 Please tell us about your place of origin and early education.
I was born in and grew up in Mumbai. My schooling was in Mumbai and Panchgani. Professionally I received a Masters degree in Hindustani vocal music from SNDT University in Mumbai.

When did you arrive in the USA and what was the special reason that brought you here?
I came here as a visiting lecturer on Indian classical music at Tufts University in 2000.

Pl give us your family background. parents, brothers, sisters.
My mother and grandmother were both classically-trained singers. My father was an active member of the Bombay Stock Exchange, and my brother is now a mutual fund manager in Mumbai, and also a talented tabla player.

Do you come from a musical family?
My own family is very musical, but I also spent the bulk of my childhood in the home of the late Ninu Mazumdar. He, his wife Kaumudi aunty and son Uday-bhai are family to me, and their influence on me is the same as if I were part of their family. I am thankful for that.

Now let us talk about your husband – Gaurav
Well, where should I start? He’s primarily a very talented Indian semi-classical singer (one of Ustad Sultan Khan’s favorite students), and also a brilliant Western singer/songwriter. He’s able to combine these two worlds in a unique way. Also he’s a Harvard-trained doctor who’s doing a fellowship in neuro-oncology – I don’t know how he does all this so well. We sing together in almost all our concerts.

Tell us about Ustad Sultan Khan
His playing and singing are the realization of ten generations of Ustad-level musicianship. One cannot become Sultan Khan in a single lifetime, and I am humbled to be his student. Also people who interact with him personally quickly realize how kind-hearted and genuine he is – like his teacher Ustad Aamir Khan his music took him beyond music to humanity.

Are you in touch with him?
Yes – when he comes to NYC he stays with us.

How old were you when you started training in music?
Age 3.

What has been the toughest challenge in breaking into the Indian music scene?
Indians are smart, and if you look at the history of Indian music, most of the names we remember are people who were world-class – in classical music Kishori Amonkar, Ustad Aamir Khan, Pandit Ravi Shankar – in film music Lata Mangeshkar, Kishore, Rafi, Mukesh – in ghazal Begum Akhtar, Mehdi Hassan, etc. That level of musicianship is a far off challenge for me, and it’s what keeps me driven.

What has been the toughest challenge in breaking into the USA music scene?
I don’t know if I’ve even started to break in yet, but all my industry mentors tell me that it’s harder to stay in than break in. That’s why my focus is on trying to create music with substance and lasting quality that is experiential, and not catered to an imagined audience. To me that is the toughest challenge.

You have used term Raag N? Roll somewhere else, very innovative and very interesting. Pl elaborate it
Raga ‘n Roll is something one of our band members came up with to easily convey the idea that we are presenting Raagas and Raaga-based English and Hindi songs in the context of a band with an Indie Rock background.

I understand you do not like the word Fusion. What is wrong with it?
Hindustani Classical Music is technically a fusion of Arabic/Persian and Carnatic music in the context of a old court/darbar system. Rock and Roll is a fusion of Blues, Jazz, and Folk traditions in the context of an idealistic but rebellious generation. No one sat down and said “now we will fuse Carnatic raagas and Arabic maqams . ” In the same way, I feel that new music should arise organically, and take its time to do so. Fusion makes it sound overly planned, but at the same time I am utterly blown away by the musicianship of the greatest self-labeled fusion band I know of – Shakti.

Who is your favorite songwriter?
Depends on the day. I like Bob Dylan, Paul Simon – also Patty Griffin.

Which song is your favorite that is sung by you?
I’m still developing these songs so I don’t know quite yet.

Which song is your favorite that is sung by other?
Indian – Raina Bitijaaye by Lata (R.D. Burman) American – Sound of Silence by Simon & Garfunkel

Which Hindi film do you think has the best soundtrack?
No one in particular, but I like the mood that Jagjit Singh’s songs create in Arth.

Which non-hindi film do you think has the best soundtrack?
Pather Panchali (Satyajit Ray) with music by Ravi Shankar.

Success has different definitions for different people. How would you define success?
Frankly I am not an overly ambitious person. I guess I am more content with simple things in life. If in the course of this life I can make a comfortable living off my passion, it would be great. If I become better known, then success to me would mean giving back to my community.

Please give some tips to the readers in creating success out of one’s skills and talents.
Don’t fear or hide insecurity – sometimes it drives you to be creative and develop your skills and talents. They say Abraham Lincoln was very insecure of his height and looks, and it drove him to find security through the public eye. Eventually it led to presidency and America’s freedom from slavery. We are taught to value security and contentment highly, but sometimes these teachings prevent us from growing. Face yourself and be who you are.

How do you compare present scenario in USA with the timings you first landed here as per opportunities, culture or any other aspects?
From talking to my music industry mentors, South Asia is starting to become cool – especially with increasing genuine interest in yoga and meditation. Six years ago our shows had almost exclusively an Indian turnout – now they’re 50-50. To me that marks a transition of sorts – how long it will take to truly materialize, and how long it will last – I don’t know.

What guidance will you give to the new arrivals here, who have similar dreams, in achieving their goals?
When I came to the U.S. I slowly came to realize why America is where it is in the world – it’s because American culture is founded on fundamental principles of humanity – freedom of ideas and speech, the freedom to progress beyond one’s socio-economic place, open-mindedness. So I believe strongly that with some degree of perseverance, ambition, humility and luck – you can become who you want to become in America.

What do you think is the secret behind your success?
If I am successful in a few years, I will be happy to answer this 🙂

What qualities / values of life would you like your fellow citizens to adhere to?
Kindness, open-mindedness.

One which most American colleagues ask me, I would like to ask you too. Why Indian in USA are at the forefront variety of fields?
I think it’s because Indian society expects them to be so – people always find happiness in living up to expectations.

What kind of difficulties did you find in starting this venture and how did you overcome them?
So many – the hardships of traveling by bus back and forth between NYC and Boston, of not having money while Gaurav was a medical student, of worrying about my older parents in India, of being seen at first as a cultural misfit, of being discouraged because I’m trying something atypical – the list goes on and on. As a classical musician one of the first lessons one learns is that success is not a guarantee. This creates a certain sort of patience, and patience leads directly to persistence. I am thankful to have great industry mentors who are showing me that the path is not easy, but who give me the strength and confidence to walk it.

How did you manage to achieve so much in such little time?
I have many years of hard work left.

What financial advice would you like to give to your fellow Indians?
I’m looking for an Indian financial advisor if you have one in mind.

How do you create work- life balance being so active?
I have divided my living room into two parts – one is a music studio, the other is a home. They are separated by a swing, and I try not to mix what I do in each one.

Do you feel the concept of success has changed in the last few years? If yes, how?
To succeed is to surpass yourself, and people have always wanted and will always want to surpass themselves.

Has your personal success changed your attitude, lifestyle or work style?
Sometimes small doses of perceived success give you overconfidence. However I always think of the great ones before us – Ustad Aamir Khan, considered by many great vocalists to be the greatest Indian vocalist of the 20th century – he used to take a bus in Mumbai, even though he could’ve bought/hired a car. In music if one stops being humble, then his/her musicianship is over.

How do you deal with failure?
Failure is painful but it’s good – it keeps you humble. So far it has always motivated me to try harder.

How do you deal with envy?
I have my own demons, but envy is probably not one of them.

Is it possible to be successful while keeping your principles and ethics intact?
The people I mentioned above – Ustad Sultan Khan, Ustad Aamir Khan – are the ultimate examples of humanity combining with success. So I think it is possible – although in the current media-driven entertainment industry, not easy.

Who has played the most important role for you to achieve success your parents, spouse, teacher or mentor?
My parents and Gaurav have everything to do with it. At the same time, my music industry mentors/managers Linda Carbone, Ben-David, Palmyra Delran and other fellow musicians such as my friends in Karyshma, give me constant guidance and perspective – which by the way is not always easy. However far I do or don’t go, I will never forget them – I hope they know that.

Who is/has been your mentor?
The one person who believed in me when no one else did was Linda Carbone – she’s also the head of the management/PR company I’m with. Amongst musicians it’s been the great drummer Kenwood Dennard, who is also a Buddhist and lives like one.

How has religion, if any, played a role in your success?
I’m a spiritual person, and a follower of Hindu principles. I believe the Bhagavad Gita holds some truths that are common to all humanity. I don’t like to use religion as a reason to separate myself from the next person .

How has education, if any, played a role in your success?
Getting a masters degree in music helps round out your skills and perspective. It cannot, however, substitute for obsessive practice.

What is the most exciting thing about success?
Everyone likes some recognition – why deny it? However I imagine success also puts you in contact with other talented people you might not have met otherwise.

Have you missed out on anything in life?
Yes – my youth, hanging out with friends, going to the mall, going to see sports games (which I love) .