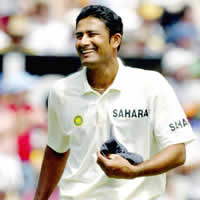 The game of cricket has, over the hundred years of its prevalence, witnessed the rise of numerous outstanding performers – players who have excelled and outpaced their contemporaries in the race to superiority, but seldom has one found someone so remarkable, yet so unsung; so unputdownable yet so ignored like the illustrious Indian leggie – Anil Radhakrishnan Kumble – loving called ‘Jumbo’ by his dear team mates.

“I think Kumble has been brilliant and has set a great example for others. I have been fortunate to see Kumble right through his career, from his first wicket to the recent and I feel very happy for him. He has been criticized for no reason. But Kumble has been absolutely calm and composed in the face of such unwarranted criticisms.” 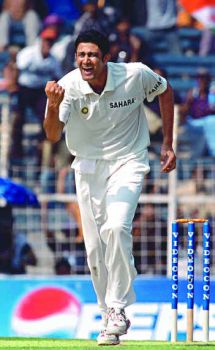 The game of cricket has, over the hundred years of its prevalence, witnessed the rise of numerous outstanding performers – players who have excelled and outpaced their contemporaries in the race to superiority, but seldom has one found someone so remarkable, yet so unsung; so unputdownable yet so ignored like the illustrious Indian leggie – Anil Radhakrishnan Kumble – loving called ‘Jumbo’ by his dear team mates.

A committed team-man, a stoic warrior, a stubborn fighter, a loving family-man and a quintessential gentleman off the field – Anil Kumble has given more to Indian cricket than Indian cricket has ever given him. Arguably India’s all time greatest leg-spinner and definitely one of world’s all time great spinner, Kumble’s flight to the top echelon of the cricket fraternity has been a story of sheer hard-work, dedication, belief in himself and a strong passion in the game!

Born on the 17th of October, 1970 at Bangalore, Karnataka – Kumble, in his early days, paid equal emphasis to studies and cricket – as a result of which he got a Degree in Computer Engineering while being an important member of the state Ranji trophy Team. He initially started off as a medium pace bowler, and later transformed into a leg spinner – which may possibly explain the mix of pace and spin in his deliveries as well as the aggression of the fast bowler, which he displays while bowling.

Anil Kumble made his debut in international cricket on the 25th of April 1990 against Sri Lanka at Sharjah in the Australasia Cup; while his debut in test cricket took place in the same year against England at Manchester. However, the flower bloomed only after a long hiatus in 1992 at the South Africa tour when Kumble emerged as the true international bowler and a recognized match-winner. Subsequently, when England toured India later that year, he took 21 wickets in just 3 Test matches at an average of 19.80 – and then went on to take his first 50 Test wickets in just 10 Test matches making him the only Indian bowler to do so. He went on to become the second fastest Indian bowler to reach 100 Test wickets (in 21 Test matches) after Erapalli Prasanna.

The mid-nineties saw the emergence of Anil Kumble as a mature strike bowler. With state teammates Javagal Srinath and Venkatesh Prasad sharing the country’s new ball, India finally had variation in its bowling department – pace, swing and spin, and much-needed support for him in the absence of Kapil Dev.

Though never considered to be a classical leg spinner, Kumble went on to become India’s greatest match-winner surpassing the great Kapil Dev. For the records, Kumble has 240 wickets at 18.66 in the 35 India wins in which he has featured. Eighteen of his 32 five-wicket hauls came in those Tests, a record that no India bowler comes close to matching. Kapil has only 90 wickets to show in the 20 tests India won with him.

In the process, Kumble went on surpassing milestones and creating records. On December 10 2004, Anil Kumble became India’s highest wicket taker to surpass Kapil Dev’s haul of 434 wickets. On 11 March 2006, he took his 500th Test wicket – thus becoming the third spinner in the history of Test cricket (after Shane Warne and Muttiah Muralitharan) and the first ever Indian bowler to capture 500 Test wickets. He is one of privileged two Indian bowlers (the other being Javagal Srinath) and one of only two spinners (the other being Muralitharan) to have taken over 300 ODI wickets.

Kumble also happens to be the only Indian bowler to have taken 5-wicket haul in a test innings for a fascinating 32 times till date, while he has captured 10 wickets in an innings on 8 occasions. Kumble also holds the world record for the most number of caught and bowled dismissals in a test at 25 c&b wickets. . 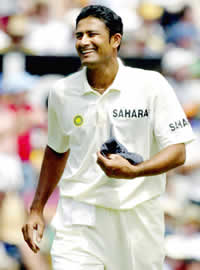 During the 16 years that he has been on the international stage for the country, Kumble has numerous occasions to cherish, but the most unforgettable and the most satisfying one must have been his breathtaking 10-wicket haul against archrivals Pakistan at Ferozeshah Kotla in February 1999. A feat only performed earlier by Jim Laker, Kumble single-handedly spun out the entire Pakistan team in the second innings not only to become only the second bowler in Test match history to capture all 10 wickets in an innings (10 – 74), but also give India a thumping victory over the arch-rivals. Another similar remarkable achievement of Kumble had been his haul of 6 for 12 against the West Indies at the final of the Hero Cup at Eden Gardens, Calcutta in 1993 – a performance which sent the mighty West Indian batsmen run for cover and gave India the coveted trophy.

Today, Kumble stands tall – having an experience of 106 test matches, where he has taken 510 wickets at an average of 28.76, while his 329 wickets in 264 One day International matches at any average of 30.76 are specific proof of his expertise in both forms of the game.

Batting-wise, Kumble has often added valuable contributions in the lower order, often defying fiery pace attack of the Australians, Pakistanis, South Africans and the West Indians with his stubborn defiance. His average of 17.51 may not actually reveal his efforts with the bat though his scores of 82 against the South Africa and 88 against the Pakistan may bear some testimony to it. But, it can be honestly commented that Anil Kumble could have been more useful with the bat than he is as on today, and he has somewhat missed on his prospects of being a potential bowling all-rounder for India.

However, it is most tragic and unfortunate that a bowler of Kumble’s stature – who along with Muttiah Muralitharan and Shane Warne is regarded as the world’s best spinner in the recent times – has been often ridiculed and criticized for his inability to spin the ball in the conventional manner. But Kumble’s unorthodox art of spinning generally proves more than a handful for the unsuspecting opponent batsmen – a fact that his 510 test and 329 One-day victims would openly admit.

As a self-styled leg spinner, he trades the leg spinner’s proverbial yo-yo for a spear, as the ball hacks through the air rather than hanging in it, then comes off the pitch with a thrust rather than a turn. He does not beat the bat as much as hit the splice, but it’s a method that has provided him with stunning success, particularly on Indian soil, where his deliveries burst like packets of water on the feeblest hint of a crack. Kumble is known more for his ability to surprise the batsman with astonishingly quick deliveries, aggravated more so on tailor-made Indian pitches, for a spinner, than his ability to turn the ball. On a turning track, Kumble can be pretty unplayable as he mixes his bag of tricks to bamboozle the batsman. Kumble has never been a big spinner of the ball but his accuracy and his enormous variety make him a difficult bowler to handle.

Kumble has also been often criticized for his struggle to make an impact outside the national territories, a failure which he had to carry for long. But given the fighter Anil Kumble is, he again rose to prove his detractors wrong when he took 24 wickets in 3 test matches against Australian down under in 2004-05 and brought India very close to a sensational series victory. To cement the matter once for all, he backed the performance soon after with a spell binding bowling performance at Pakistan to give India a historic series victory at Multan.

Kumble’s performance is not only limited with the ball, but his on and off the field demeanor won him friends and admirers galore! The present Indian Captain and his predecessor may differ violently over their assessment of Greg Chappell, but they are unanimous about Anil Kumble. States Rahul Dravid, the Ranji trophy team mate of Kumble -” There is something wonderfully thorough, organized and disciplined about his approach, which makes him a powerful role model. He is the essential 100-per-cent cricketer, every day, every over, every ball, bringing great energy to the contest, facing every challenge with his jaw sternly set – or even broken for that matter! His attitude makes him a dream to captain. His stamp on the Indian game is now indelible.”

Saurav Ganguly, arguably the most successful Indian captain till date, has witnessed many timeless battles of the legendary leg spinner and said recently – “He’s a phenomenal player for India in both forms of the game. He’s been a champion, an absolute match-winner; he doesn’t give up in any surface.” 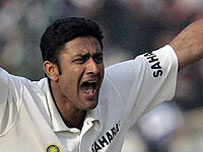 .The great Sachin Tendulkar says about Kumble: “I think Kumble has been brilliant and has set a great example for others. I have been fortunate to see Kumble right through his career, from his first wicket to the recent and I feel very happy for him. He has been criticized for no reason. But Kumble has been absolutely calm and composed in the face of such unwarranted criticisms.”

The soft-spoken, mild mannered Anil Kumble has risen to great heights, and has grown in stature, but at heart he remains a boy next door. He is the quintessential gentleman off the field and has been a great ambassador for Indian values over the last decade and a half, but when it comes to the game of cricket, few cricketers play with such fire and passion. Kumble’s aggression and dedication is exemplary.

Till the day the game of cricket will be played, the image of Anil Kumble coming on to ball to the West Indians at Antigua in 2002, with a broken jaw- face heavily bandaged to ensure his jaw do not drop off, will remain cemented in the minds of all sports lovers.

It may be true that superstardom has eluded the low-profile Kumble throughout his career, he does not even star in a decent commercial advertisement unlike his teammates, but his deeds speak for themselves. Indian cricket will always worship Anil Radhakrishnan Kumble for his untiring efforts, his match winning performances and his uncompromising dedication for the team and country!