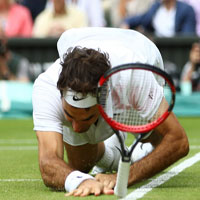 Star tennis player, Switzerland’s Roger Federer has announced that he will not compete at the Rio Olympics and miss the rest of 2016 in order to treat an injury.

34-year-old Federer reached the semi-finals of Wimbledon, where he lost to Milos Raonic, but the 17-time Slam winner underwent surgery on a knee injury in February, which forced him to miss the French Open.

It was the first Grand Slam that the Swiss great had not competed in since 1998, but his announcement to pull out of the Olympics means Federer will not take part in the US Open too and, surely ending his hopes of ever winning a singles gold – although he did win doubles gold in Beijing in 2008.

Federer said that he took the decision on the advice of doctors as he aims to prolong his career for as long as possible.

On Facebook, he said that after consulting with several doctors, he felt it best to end his season in order to prepare for next year. The 34-year-old has no intention of calling it quits just yet, though.