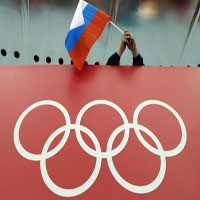 Ninteen more Russian rowers were banned from the Olympics, taking the toll of the nation’s athletes suspended from Rio to 108 after explosive revelations of state-run doping across Russian sport.

As the list of supsended Russians grew, the International Olympic Commitee continued to face fierce criticism for failing to ban Russia outright.

Bach fired back that the decision to leave individual sports federations to decide which Russians could compete “respects the right of every clean athlete around the world.” Bach noting that would-be Russian Olympians must clear “the highest hurdles” to be green-lighted for the Games, which start on August 5. Five canoeists and two modern pentathletes were barred, with the number of Russians banned since Sunday standing at 41.

They are in addition to 67 track and field athletes already banned by the International Association of Athletics Federations (IAAF).

While there was good news for Russian athletes competing in judo, equestrian, tennis and shooting, World Rowing (FISA) came down hard, banning 22 of Russia’s 28 rowers.

FISA said that those banned were “not at all considered to have participated in doping” but were being excluded as they “do not meet the conditions established by the IOC”.

“This is a humiliation” Russian rowing federation president Veniamin But told the R-Sport agency. “I am in shock, but we won’t stop the battle. Our Olympic Committee is holding discussions with the IOC on our behalf.”

With just six rowers Russia can only compete with one boat in Brazil, a men’s coxless four, after qualifying five boats.

Pavel Sozykin was the competitor banned by World Sailing, with the other six Russian sailors allowed to compete, and a replacement for Sozykin will be allowed.

The International Canoe Federation (ICF) said it had taken “swift action” to remove five canoe sprint paddlers from Rio after the release of additional information naming those implicated in the McLaren report.

The report by Canadian law professor Richard McLaren for the World Anti-Doping Agency (WADA) detailed an elaborate doping system in Russia directed by the sports ministry that affected more than 30 sports.

The banned five included Alexey Korovashkov, a five-time world champion who won a bronze medal in London four years ago, and Alexander Dyachenko, who took gold in a doubles kayak sprint.

“This is a bitter blow for the Olympic movement and we are saddened that our sport is implicated. We have taken swift action and removed all offending athletes where doping evidence exists,” said ICF secretary general Simon Toulson.