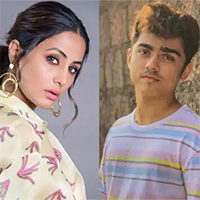 One of the most popular names of Indian television, Hina Khan will soon be making her Bollywood debut in a film directed by Vikram Bhatt. Hina rose to popularity with Star Plus’ show Yeh Rishta Kya Kehlata Hai, and she was last seen playing the character of Komolika in Ekta Kapoor’s Kasautii Zindagii Kay.
We had earlier told you that Hina has taken a break from the television to pursue her Bollywood dream, and here’s some latest updated from her debut film. The movie has been titled Hacked. And, we will be seeing yet another TV actor playing the antagonist in the film. TV’s teen star Rohan Shah will be playing the character of an obsessive lover in the movie. Rohan has worked in many teen dramas such as SONY’s Itna Karo Na Mujhe Pyaar, MTV Fanaah, and Gumrah: End of Innocence. The actor has also worked in Hrithik Roshan starrer Krrish 3, in which he played the younger version of Vivek Oberoi’s character ‘Kaal’. He has also worked in web series like It’s Not That Simple and CyberSquad.
In Hacked, Rohan will play an 18-year-old boy who falls in love with Hina. As per the reports, Hina will be playing the character of a magazine editor.
While Hacked is Hina Khan’s big Bollywood debut, it is not her first film. Hina has already worked in a short film called Lines, which is set against the backdrop of Kargil war. She even went to the Cannes Film Festival earlier this year for the screening of her film.
The shooting for Vikram Bhatt directed Hacked is expected to begin from 20th August.