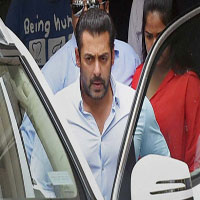 Bollywood actor Salman Khan was today acquitted by the Rajasthan High Court in two cases related to poaching of Chinkaras in Jodhpur in 1998.

The court held that the pellets recovered from the Chinkaras were not fired from Khan’s licensed gun.

The driver of the jeep that was used by Khan and his co- stars on their alleged hunting mission has been missing, weakening the prosecution’s case against the movie star.

Appeals of Khan against sentence in the two cases relating to poaching of Chinkaras in Bhawad and Mathania was allowed by the high court which acquitted him in both the cases.

Justice Nirmal Jit Kaur rejected the plea of the state government against the actor.

Two separate cases had been registered against Khan under section 51 of Wildlife Protection Act for poaching of two chinkaras in village Bhawad on 26-27 September, 1998 and one chinkara in Mathania (Ghoda Farm) on 28-29 September, 1998.

The trial court (CJM) had convicted him in both the cases sentencing him to one year and 5 year imprisonment on February 17, 2006 and April 10, 2006 respectivel.

The convictions were challenged by Khan in the sessions court, which dismissed appeal in Mathania s case and transferred appeal to high court in Bhawad s case, where already two appeals by the state government had been pending.

Hearing on both these petition in high court had begun on November 16, 2015 and were completed on May 13, 2016, after which justice Nirmal Jit Kaur had reserved her judgement.

While arguing the case in the high court, defence counsel Mahesh Bora had contended that Khan had been falsely framed in these cases, merely on the statements of a key witness Harish Dulani, the driver of the vehicle, which was allegedly used in poaching in both these cases.

Bora argued that Dulani was never available to them for cross examination and hence his statements could not be relied upon in conviction of Khan. He also argued that both of these cases have been built on circumstantial evidences and there was no eye-witness or any material evidence against Khan.