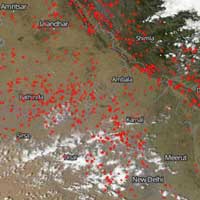 Despite a ban and dire warnings from the Delhi high court, crop fires have started raging across Punjab and northern Haryana, data from NASA satellites reveals.

In what could be further bad news for Delhi’s air quality, the data indicates that the fires may have begun early this year, compared with 2015.

The burning of paddy stubbles to clear the fields for winter sowing is a rampant practice in Punjab and Haryana, leading to severe air pollution across the region.

The fires may start impacting Delhi’s air quality in the coming days.

On October 6, the Delhi high court had warned the chief secretaries of four states inclduing- Punjab, Haryana, UP and Rajasthan, that they would be held responsible if crop burning persisted in their states this year.