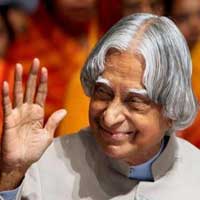 He was fondly called the people’s President for being the first President in the country to connect with the youth via the internet.

He was named the ‘Missile Man’ of India for his contributions in the field, he redefined the Presidency during his tenure from 2002 to 2007.

He often spoke to children and the country’s youth – inspiring them to think big in life; he also penned a number of books.

He has inspired people across the globe to believe in their dreams as he once said “You have to dream before your dreams can come true.”

Various programmes are being organized across the country in the memory of the former President of India.