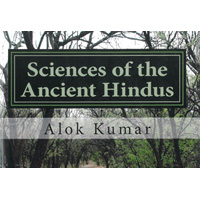 Sciences of the Ancient Hindus: Unlocking Nature in the Pursuit of Salvation By Alok Kumar

Alok Kumar, in his book, Sciences of the Ancient Hindus: Unlocking Nature in the Pursuit of Salvation, has provided a powerful and comprehensive insight into the extraordinary intellectual contributions of the ancient Hindus, the full story of which had hitherto remained largely unknown and unappreciated throughout millennia of neglect. The two notable advantages of having one of the longest-lived continuous civilizations, plus the absence of any conflict between science and religion, combined to create an environment that would produce the basis upon which much of our scientific and mathematical knowledge rests. All of this is supported by an extensive list of meticulously documented references, including original documents translated from Sanskrit. 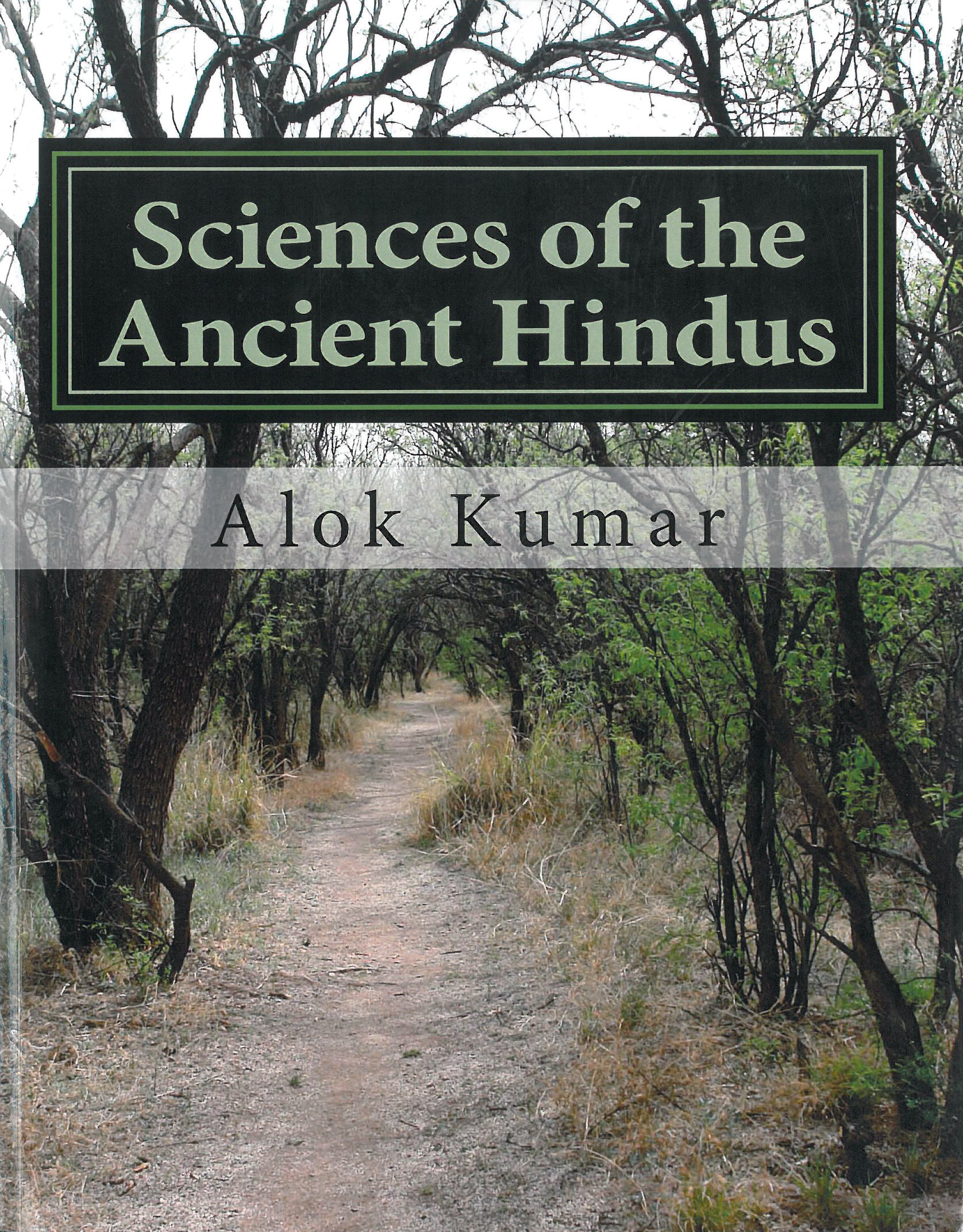 The ancient Hindus created the critically important mathematical concept of zero, and the related base ten and place-value notation, which, after being translated, were transmitted through Arabia to the rest of the world. Predating the Greeks by many centuries, ancient Hindu documents mention the Pythagorean Theorem, the concept of the trigonometric sine function, the Fibonacci sequence, the square-root operation, calculating the unknown in an algebraic equation, and much more. Other areas where the Hindus made important, fundamental contributions include: Astronomy (heliocentric solar system), Physics (space, time, mass, the atom), Medicine (the Ayurveda system of medicine, surgery), Metallurgy (Damascus steel), Chemistry (gunpowder, fermentation, alchemy), Yoga (science of self-improvement), and Biology (life in plants, biomimicry, vegetarianism). There are ample references from various civilizations that acknowledge their debt to the ancient Hindus, including Greek, Islamic, Chinese and European sources, as well as modern intellectuals and scientists, such as: Erwin Schrodinger, J. Robert Oppenheimer, Ralph Waldo Emerson, Henry David Thoreau, Carl Jung, Voltaire and others.

The ancient Hindus produced their works anonymously, working together in harmony and dedicated purpose. This is in stark contrast to the typical solitary work of the great geniuses of the western tradition, such as: Archimedes, Galileo, Kepler, Newton, Einstein and others. However, during the centuries following the original work of the “Ancient Brahmins of the Ganges,” there are a few Hindu luminaries such as the philosopher-scientist Kanada (his work appeared sometime between the sixth century B.C. and the 10th century B.C.), and the mathematician-astronomer Aryabhata I (476-550 A.D.), who continued the ancient traditions in the sciences and mathematics, building upon the earlier writings. Kanada, who founded the Vaisesika system of philosophy, developed a subtle and sophisticated atomic theory of nature, preceding the later work of the Greek philosopher Democritus (Ca. 460-370 B.C.).

In 499 A.D., when he was only 23 years old, Aryabhata I wrote an extraordinary book, the Aryabhatiya, that summarized the mathematics, spherical astronomy and time reckoning of the much earlier ancient Hindus. In the mathematics part, Aryabhata stated the value of pi to be approximately 3.1416, showed how to solve indeterminate equations and quadratic equations, calculated the latitudes of the planets, and stated the theory of planetary motion. In astronomy, a millennium before Copernicus, Aryabhata proposed axial motion of the earth while the stars remained stationary. He did this using the concept of relative motion, by an analogy with a boat moving in a river: to a person in the boat, stationary objects on the shore seem to be moving backwards while to a fixed observer on the shore, the boat would appear to be moving forward. Thus, “As a man in a boat going forward sees a stationary object moving backward, just so in Sri-Lanka a man sees the stationary asterisms (stars) moving backward toward the west.” This brilliant observation and interpretation would subsequently be rediscovered by the great Parisian scholar Nicole Oresme (14th century A.D.), and later by Copernicus, Galileo and others. The significance of this observation is that axial motion of the earth is consistent with a heliocentric planetary system, while being inconsistent with a geocentric model. In consideration of all his many contributions to mathematics and science, there is a crater on the moon named Aryabhata in his honor.

A major reason why knowledge of Hindu science was unknown for millennia is that it was contained in religious books written in Sanskrit, a language that employed sophisticated literary techniques such as allegory, as well as the fact that Sanskrit is a notoriously difficult language to translate accurately. There are also subtle political reasons during modern times that discouraged research into ancient Hindu history. However, in his book, Kumar has provided compelling and verifiable evidence, using ancient documents, of the critical importance of the ancient Hindus in the early development of science and mathematics. It is the opinion of this reviewer that Sciences of the Ancient Hindus fills a gap in the history of science that preceded the work of the ancient Greeks, to form a more detailed and complete picture of the earliest beginnings of science and mathematics.

“The present proposal is commendable in seeking to contribute to understanding the history of Hindu science. But the current proposal is somewhat problematic, especially in light of the deeply contested nature of the adjective Hindu and its association with a particular kind of nationalist politics.” Such was one international publisher’s rationale to reject my book, Sciences of the Ancient Hindus: Unlocking Nature in the Pursuit of Salvation. It was not an isolated experience; One publisher after another demanded I replace the term Hindus with Indians. When I refused, the book was rejected. Finally, I had to no option but to self-publish.” Dr. Alok Kumar 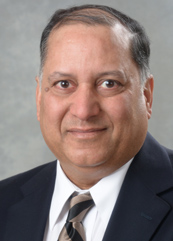 Dr. Alok Kumar is a professor of physics at the State University of New York at Oswego. He was born and educated in India. Later, he taught at California State University at Long Beach. He has been teaching in the American higher education for over three decades. At Oswego, Kumar has received the Chancellor’s Award for Excellence in Teaching and the President’s Award for Creative and Scholarly Activity and Research. He has more than 65 refereed research publications and coauthored a reference book, Science in the Medieval World. His another coauthored book, A History of Science in World Cultures: Voices of Knowledge will soon be published. Kumar is a recipient of the Alexander von Humboldt Foundation, Germany and NOVA/NASA fellowships. About 90 articles are published in the popular media that discuss Kumar’s scholarship. These media outlets include The Washington Post, Family Life, The Scientists, and India Abroad. He is active in the fields of atomic physics, chemical physics, history of science, and science education.

What Scholars are Saying

“While there is voluminous literature on this subject claiming all kinds of original contributions of Sciences of Ancient Hindus in various disciplines few stand the test of accuracy, objectivity and scientific rigor. Dr. Alok Kumar’s book is one of the few that qualifies in this respect. His writing is crisp and clear with thoroughly verified credible referencing and unbiased presentation. I recommend this book to all persons interested in this subject as a must read category of books.”

“The Sciences of Ancient Hindus is a subject of great richness, far too often overlooked, that deserves a central place in the history of pre-modern science, a role now advanced by this excellent work. Alok Kumar has provided an enormous service to the scholarly and teaching communities with this well-researched, wide-ranging, yet simply written volume.”

Scott L. Montgomery
Geologist, Author, and Affiliate Faculty Member at the University of Washington in Seattle

“For most westerners the ancient world seems to end with Greece. I wonder whether ignoring the huge contribution of ancient India is intentional or out of ignorance. It is true, in modern times Indians themselves played down India’s philosophical and scientific insights, because the British education system had successfully portrayed their ancient tradition as not worthy of study. It is about time that the truth is coming out regarding the Sciences of Ancient Hindus. Great work by Prof. Alok Kumar.”

“There has been a long-time need to re-connect the East with the West and Prof. Kumar fulfills this long-time need. How many of us have nodded on bended knees to the Greeks and the 18th Century Age of Enlightenment and so forth with the creation and sustaining of science.Finally a book dedicated to what has been left out…the major, crucial contributions of vedic culture, the Ancient Hindus and others to the creation and evolution of the sciences. His book even has a wonderful chapter on Yoga as well. A truly masterpiece of synthesis, long-needed but, alas, until now, long-neglected.”

Why Health and Fitness Month Should Include Your Mouth
When Getting Healthy, Start Small