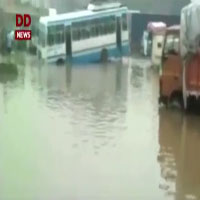 In Bihar flood has spread to more than 10 districts affecting more than 20 lakh people in the state. Flooding in Bihar is mainly due to heavy rainfall in Nepal’s catchment areas as a result of which water from the swollen rivers are discharged towards the neighbouring areas in Bihar.

Around one lakh hectares of land have been affected by the floods caused due to rise in the water levels of Mahananda, Bakhra, Kankai, Parmar and Kosi rivers of the state. Road links to scores of villages have been cut off.

IT city Bengaluru that often designs hi-tech solutions for the whole world, is itself in need of a solution other than boats that are out to rescue people stranded in water logged areas. People were also seen fishing near the swelling lakes.

Overflowing lakes and drains coupled with uprooted trees compounded woes for commuters. Adding to this was a traffic gridlock that left a long pile-up of vehicles on roads across the city, particularly on the routes leading to Electronics City, the IT hub.The floods that brought Chennai to a halt last year are still fresh in peoples minds.

Heavy continuous rains in Mumbai and Pune have also thrown life out of gear. One death has been reported from the blocked Western Express Highway in Andheri, because of the rains. Intermittent rains on Thrusday night have resulted in this flooding, and in the low lying areas water has accumulated to a depth of 2 feet.

While many offices in Gurgaon urged employees to work from home, others advised them to leave early to avoid the rush hour traffic and jams. Meanwhile, police is assuming powers under Section 144 to take control of cranes or other equipment to clear a traffic jam that lasted 24 hours.