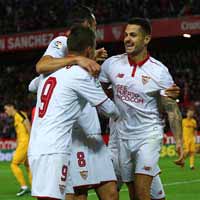 A stunning four-goal blitz in 10 minutes allowed Sevilla to leapfrog Barcelona into second in La Liga on Saturday as Luciano Vietto scored twice in a 4-1 win over Malaga.

However, Atletico end the year in sixth after wins for Villarreal and Real Sociedad at Sporting Gijon and Granada respectively maintained their one-point lead over Diego Simeone’s men.

Sevilla edge a point ahead of Barca and to within five of league leaders Real Madrid, who are not in league action this weekend as they face Kashima Antlers in the Club World Cup final in Yokohama, Japan, on Sunday.

Barca, though, can reclaim second when they host Espanyol in Sunday’s Catalan derby (1945GMT). Sevilla killed Malaga off with a series of brilliant first-half team moves as Vietto slotted home Steven N’Zonzi’s through ball for the opener before being left with the simplest of tasks to double the lead three minutes later from Vitolo’s determined run and cross.

The goals continued to flow as Wissam Ben Yedder added a third before Vitolo made it four before half-time.

Sevilla defender Adil Rami got himself needlessly sent-off for two quickfire bookings just after the hour mark and Sandro Ramirez netted a consolation for Malaga with a fine free-kick.