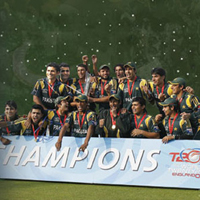 For a nation that is beleaguered with terrorism, violence, corruption and political unrest, what glorious moments of relief, joy and jubilation Younis Khan and his boys gave to the countrymen. Pakistan’s victory at the T20 Cricket World Cup 2009 might not be a solution to the country’s ever-increasing problems, but certainly has temporarily embalmed the pains and wounds the common Pakistanis have been carrying for a long time.

It is true that what sometimes big and illustrious efforts often fail to achieve, sports can do very easily. And for the people of the Indian sub-continent, it is probably most applicable. India, Pakistan, and Sri Lanka have always found ecstasy, glory and pride and honor in the success of their national sports team-that is,cricket. Cricket is not just a game here; it has its place next to God. So, when the national teams enter the cricket field, it has the national patriotism, pride and fanaticism of millions of its countrymen rooting for its support.

And ultimately, as it happened, the final of the grand event of the newest version of cricket that has rocked the cricketing world in the recent times-the Twenty-Twenty (T20) World Cup final in 2009-saw two of these cricket-crazy nations competing against each other- Pakistan and Sri Lanka. Ironically, Pakistan also reached the finals of the inaugural tournament in 2007, ultimately won by India.

Pakistan’s success in this year’s championship is definitely a tale of rags to riches. One of the most talented but mercurial teams of the cricketing fraternity, Pakistan is mostly unpredictable in their performance. Moreover, in comparison to other cricket-playing nations, the recent story of Pakistan was certainly different. Pakistan’s already bruised reputation as an international cricket venue was shattered on 3 March this year when insurgents launched a gun-and-grenade attack on the Sri Lankan team as they traveled to a match in Lahore. The brazen assault left seven Sri Lankan players and their assistant coach injured, as well as killing six policemen and two civilians. After the attacks, the International Cricket Council stripped Pakistan of its share of World Cup 2011 matches-the second major event shifted from the country after the Champions Trophy 2009 was moved to South Africa. Even before the attacks, foreign teams were refusing to tour the country because of security fears. Australia postponed a tour in March last year, forcing the one-day series to be played in the United Arab Emirates in April-May this year. 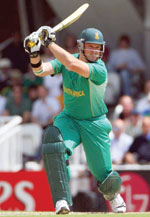 As a result, Pakistan’s team traveled to South Africa for the World Cup quite deprived of match practice as they had very little matches to play in the recent times. Moreover, their defeat to archrivals India in the warm-up game to the main tournament came as a great shock and matter of concern as even their supporters started doubting the team’s ability.

In the preliminary round, Pakistan was grouped with England and low-ranking Netherlands. And, what a beginning to the tournament it was, as pushover Netherlands edged past England to set the event on fire. Pakistan too, had a very bad start as they lost their opening match to England at the Oval by 48 runs, submitting to the batting prowess of English batters, primarily Luke Wright and Kevin Pieterson. However, Pakistan rose to the occasion when it mattered as they annihilated Netherlands by virtue of an all-round performance in their final group match at the Lords by 82 runs.

Subsequently, elevated to the Super Eight stage, Pakistan was placed in group F-where it had to play with Sri Lanka, New Zealand and Ireland to gain a place in the semifinals. India, England, South Africa and West Indies were the other four teams clubbed in Group F at the Super Eight stage. Pakistan’s first match at this stage was against the Sri Lankans, which eventually, became the line up for the final-but it was Sri Lanka who called the shots at the group stage. They defeated Pakistan by 19 runs, when the Pakistanian team failed to chase 150 runs in the stipulated 20 over. Under contention of bowing out from the World Cup, Pakistan had to win both their remaining games in style-and they did exactly that. A strong contender for the title, New Zealand lost their way before the vicious-paced bowling of speed-star Umar Gul who took 5 wickets for 6 runs and bundled the Kiwis for a paltry 99. Pakistan won the game by 6 wickets with 41 balls to spare. Eventually, Pakistan trounced Ireland, the surprise of the tournament, by 39 runs, leveraging on batting prowess by Kamran Kamala and bowling by Shamed Ajmal. In the process, Pakistan set up the semifinal clash with South Africa, while Sri Lanka was all set to take on a resurgent West Indies. 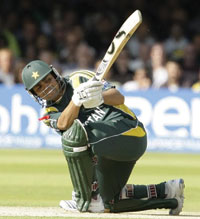 Interestingly, the tournament had its fair share of upsets. The uncrowned champions of the cricketing world-the unputdownable Australians-failed to make it even to the Super Eight stages, thus raising a question about their ability in this shortest form of the game. Hosts England was also shown the door in the Super Eight stage, and so were the Kiwis. Bangladesh, though were not of the superlative category as other test playing nations, but their defeat in the hands of Ireland and subsequent exit was also a notable event in the tournament. But-the biggest bombshell that shocked the cricket lovers all across the world was the unceremonious exit of Mahendra Singh Dhoni’s team India-the reigning T20 World Champions in the Super Eight Stage. Clearly, the favorites, the Men in Blue, failed to live up to expectation and displayed a disastrous string of performances that made them suffer ignominious defeats in all their Super Eight matches at the hands of England, West Indies and South Africa. Dogged by problems galore, including fitness issues, soured coach/captain relation, poor media handling, and then backed by failure to shine in the right occasion, made the nation of 1 billion people wail in despair. 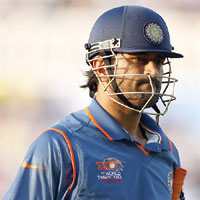 However, the scenario in the neighboring country was not gloomy at all. The entire nation pinned their hopes amidst a disturbed socio-politico-economic crisis in the country on Younis Khan’s band of boys. And, indeed, they did not let their followers down. At Nottingham, the first semifinal between the Pakistanis and the South Africans saw a close contest. Pakistan, who batted first and scored 149 in 20, over banking on Shahid Afridi’s half century successfully defended the score as the Proteas fell short by 7 runs. Afridi continued his all-round performance by getting 2/16 and was the Man of the Match. In the other semifinal, Tilekeratne Dilshan single-handedly took the Lankans to the final as his power packed 96 off 57 balls that helped them register a 57 run win against a hapless West Indies.

The stage was all set for a thunderous final as the two giants of world cricket met for the finals. At the mecca of world cricket – the Lords, on June 21, two nations, that breathe cricket, eat cricket and drink cricket, competed for the coveted trophy. The trophy had eluded Pakistan the last time, and for Sri Lanka, it was a matter of pride and reaffirmation of their cricketing supremacy. But ultimately, it was probably the heart that ruled over the head. The desperation and extreme desire to win was probably strongest for the insurgent-hit Pakistan team, as in the game, that mattered the most. 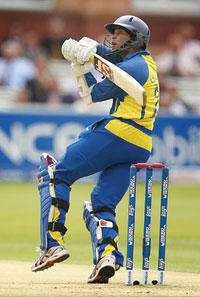 It wasn’t the edge-of-the-seat final that would have topped off the ICC World Twenty20 in style, but that won’t matter to Pakistan who gave their nation a something to savor amid troubled times. From the moment Tillakaratne Dilshan, the tournament’s top scorer, fell in the opening over, Pakistan had a grip on the match. Unbeaten innings of Kumara Sangakkara’s 64 and Angelo Mathew’s 35 helped the Islanders amass 138 in the stipulated 20 over; but it was not enough against a strong Pakistani batting line up. In fact, Sri Lanka could never recover from the burst of excellent play from Abdul Razzaq, who got 3-20 and reduced the men from the emerald island to 4-32.

When Pakistan came to bat, it was a clinical, thought-out and utterly professional display. For Sri Lanka, early wickets were key and they didn’t materialize as Akmal and Shahzaid Hasan played sensibly. The wizardry of Mendis and Muttiah Muralitharan, and the accuracy of Lasith Malinga, have provided wonderful entertainment over the last weeks, but on this occasion couldn’t conjure the magic spell that was needed. In the end there were no theatrics. The glory came with a leg-bye, and with Lasith Malinga appealing for a leg-before. Then there was Shahid Afridi, who emerged as their trump card, guiding his team home in the 19th over with an unbeaten 54, standing with arms wide open, pointing upwards. It was left to Younis Khan to raise the trophy in what he later announced would be his final Twenty20 International, in front of a sea of delirious Pakistan supporters.

As Afridi, the player of the final, and Malik embraced mid-pitch after the winning moment, the emotion showed what this victory means for Pakistan. The teammates came charging in; a flag was produced; some of the Pakistani players knelt to kiss the turf; and the stadium was awash with green. Pakistan’s rise from rank outsiders to champions is an extraordinary display for a team that had to beat Netherlands by a significant margin to even stay in the event during the group stages. However, they have peaked at the right time and couldn’t have produced a more complete performance for a final. They fell five runs short two years ago at Johannesburg, but this time there was no mistake Sri Lanka’s team that have been the model of consistency, were caught off guard by aggressive tactics.

As the Pakistan team took their victory lap, the public address system belted out “Dil Dil Pakistan,” an all-time favorite rock song by Vital Signs, a ’80’s Pakistan band. Later at the press conference, Younis Khan described the win as a gift to the nation and dedicated the win in the memory of their deceased coach Bob Woolmer.

Back home, the historic win in the final sparked jubilation across the country and worldwide. People took to the streets after the match in all major cities of the country including Lahore, Rawalpindi, Islamabad, Multan, Karachi, Peshawar and Quetta, and expressed their joy in their own way. They distributed sweets and danced to the beat of drums to celebrate the much-needed victory. While some people resorted to firing guns in the air, others set off fireworks, lighting up the night sky. Theses were the scenes witnessed not only in Pakistan but also in every corner of the world wherever Pakistanis are living. Whether it was the streets of U.S. or Britain, the Pakistani flag flew high, conveying the message of peace, and expressed that the Pakistani nation is a peace-loving nation and fond of healthy activities.

The cricketers have done their bit to lift a beleaguered country. They needed this success most and perhaps that drive was the deciding factor. The country faces a difficult few years of rebuilding, but this victory will have brought great joy and, hopefully, belief in a brighter future. Quite true, that the T20 world cup triumph was not just another success for the nation, but certainly a lifeline to regain the faith in themselves.