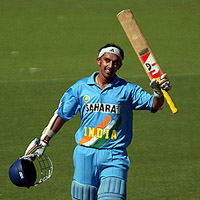 The format of T20 has been designed to do away not only with the dull and dreary lingering days of five-day Test Cricket, but also to do away with the seemingly static mid-innings phase of one-day cricket. This is a new version of the game that matches a thriller, brings more fizz to the game, combines the sport with top-level of entertainment and most importantly, gets back a whole lot of disinterested time-savvy spectators back into the stadium. Here, the main mantra is hitting the ball bang, bang, and bang – disregarding all other factors.

The T20 format is a little different from its immediate predecessor, one-day cricket, in the sense that unlike the one-dayers, which is played on a 50 overs basis, this format, as the name suggests, is played on a 20 overs a side basis, mostly in the evenings under floodlights. The match is completed in about three hours, with each innings lasting around 75 minutes. Thus, this brings the game closer to the timespan of other popular team sports such as football.

As far as the rules are concerned, in this 20 over a side match, each bowler bowls a maximum of four overs per innings. There are certain fielding restrictions applied in the lines of onedayers, and the over-stepping (no-balls) is penalised not only by an extra run or an extra ball, but also the next ball is declared as a free hit, where the batsman cannot be out, unless he is run out. However, the most interesting rule of T20 is when a match ends in a tie. Then, the tie is broken with a bowl-out with five bowlers from each side delivering one ball each at an unguarded wicket, most hits deciding the winner.

The history of T20 cricket affirms the fact that the new format of cricket was invented just a few years back in England, and the father of this format is Nick Borcich. The English were bored with lengthy county matches, and at times, they even became bored with the ODI matches as well. Nick’s idea was to cut down the duration of the game so that the total match can be finished within a three to four hour time span. The England and Wales Cricket Board (ECB) also liked the idea very much and it arranged the first T20 cricket tournament between the county teams. In a particular match of the tournament, a large number of spectators came and enjoyed the match.

For those more interested in records, Middlesex versus Surrey was the first T20 game to be held at Lord’s on July 15, 2004, a game that attracted a crowd of 26,500. In another haven of cricket, Australia, the first T20 game was played at the WACA ground between the Western Warriors and the Victorian Bushrangers on January 12, 2005. Interestingly, the first International T20 was played in New Zealand a month later, where Australia clashed with the host at Auckland.

As the ECB got considerable success by organizing the tournament, the boards of other countries were encouraged, and they also started arranging their own T20 cricket tournaments in their countries. All of these tournaments in Australia, Pakistan, New Zealand, England, and South Africa became popular almost instantly. The increasing popularity of the new format of cricket across the world also persuaded the world governing body of cricket, the International Cricket Council (ICC), to think about it seriously. They decided to organize the first ever T20 World Cup in 2007.

Interestingly, the Indian cricket board did not pay much attention to the new format of the game in the initial days, and India was one of the last entrants to T20 cricket. In fact, India went to play the T20 World Cup with the experience of only one international game behind them. However, following the unprecedented success of the team in the World Cup and the euphoria that followed thereafter, the Indian Cricket Board decided to cash in on the hype and since then, India has become the a proponent for T20 cricket.

Not only have domestic tournaments adopted T20 games as a regular event, but the commencement of ICL, the Indian Cricket League, a private enterprise sponsored event that included city based teams with International players was just the beginning. The Indian Cricket Board, not recognizing the ICL and its players, decided to start its T20 own tournament, the IPL or Indian Premier League, and that has opened all floodgates. The event to be held in April-May this year stars all the top-grade names of International Cricket as well as India’s top names, all selected for teams owned by reputed film stars and entrepreneurs. The hype and euphoria that is associated with this event has never been witnessed before, and this confirms the growing popularity of T20 cricket.

There is hardly any doubt that T20 is there to stay and rule. Traditional test match players like Anil Kumble, Muralitharan, and Rahul Dravid are all going ga-ga over this mode of the sport, while the attachment of the younger generation hardly needs mention. With the emergence of the T20 format in the world of cricket, the game has gained a rather contemporary dimension, and it is certainly going to make the game more and more popular the world over. Beware soccer, your competitor is on the prowl!

PLAYERS WHO ARE COMING TO SOUTH FLORIDA

MOHAMMED AZHARUDDIN [INDIA] One of the most stylish batsmen ever, Mohammed Azharuddin is in a class of his own. Born in 1963, Azhar announced his arrival, against England in 1984-85, with three hundreds in his first three Tests, a feat that has never been matched. Having played 99 test matches and 334 one- dayers, accumulating over 15,000 runs with 29 centuries in both forms of the game, the dashing and elegant batsman, for many years, formed the backbone of the Indian middle order batting. He was also a top class fielder, possessing a safe pair of hands. As a captain, Azhar was one of India’s most successful – winning 14 test matches for the country.

The annals of cricket will always remember Javed Miandad as the fiercely aggressive cricketer, who took Pakistani batting to new heights. Debuting in 1975, Javed went on to play 124 Tests and accumulated 8,832 Test runs with 23 centuries and 6 double-hundreds – a feat that speaks for itself. Miandad was an extremely crafty batsman who could steal runs and also score long heaves out of the ground with grace. As the coach of Pakistan after his retirement in 1996, Javed could not reproduce the magic he otherwise showed with his prowess.

RICHARD BENJAMIN (RICHIE) RICHARDSON [WEST INDIES] Richie Richardson is an immensely talented player who not only played for West Indies with mighty success, but also held the reins of the teams after the departure of his more illustrious pre- Richie Richardson decessor Viv Richards. During 1983 to 1995, Richie played 86 Test matches scoring 5,949 runs and 16 centuries. He also scored 6248 runs in 224 one-dayers. On the field, Richie was a destructively brilliant batsman, particularly on hard pitches where he could throw the bat through the line with abandon. While off the field, he was gentle, unfailingly courteous, modest, and stood for sportsmanship. The flamboyant batsman and successful captain of the team, Richie was famous for his wide-brimmed maroon hat which he wore in preference to a helmet against even the fastest of bowlers. Richie retired in 1996.

It is not easy to live up to the name of a legendary father like Sunil Gavaskar, but for son Rohan, his efforts are certainly genuine. A middle-order left-handed batsman and a part-time left-arm-orthodox spin bowler, Rohan does not have the class or the temperament of his father. He is more attacking and suitable for the shorter versions of the game. Having spent many years in the wilderness, he was selected for the Indian cricket team to tour Australia in 2004. His first-class performance for his adopted state, Bengal, has earned him laurels in the domestic circuits. He was appointed the captain for the state team in 2001-02. Presently, Rohan plays for the Kolkata Tigers in the rebel ICL T20 tournament.

It is the first ever state-of-theart cricket stadium in the U.S.A. located at Central Broward Regional Park in Lauderhill, Florida.

Cricket fans throughout the U.S. and the rest of the World can witness the top present and former 20/20 ALL STAR Cricketers from India, Pakistan, West Indies, USA and rest of the world competing against each other in an exciting 20/20 Cricket Tournament. Guest MAQ T20 – International Cricket Tournament ’08 C.C.U.S.A. is staging a 3-day Cricket extravaganza called “MAQ T20” International Cricket Tournament ’08. The Tournament will be played in the brand new $71 million cricket stadium in South Florida. cricketers include Mohammed Azharuddin, Javed Miandad, Richie Richardson, and Rohan Gavaskar.

Over 30,000 fans will attend this Cricket Carnival over the 3-day period. There are also two concerts planned, and some of the world’s leading artists will perform.

Cricket Council U.S.A. (C.C.U.S.A.) is a professional cricket and sports management organization, headquartered in Florida, and is committed to promoting the game of Cricket at the grass-root and professional levels in the United States of America.