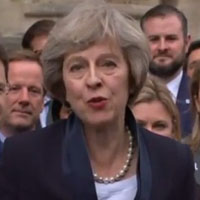 This ends three weeks of leadership turmoil and political backbiting that began when Britons voted last month to exit the European Union.

Mr Cameron tender his resignation to the Queen on Wednesday.

Her final rival for the Conservative Party leadership, Andrea Leadsom, withdrew from the race on Monday morning, citing overwhelming support for May among Conservative MPs.