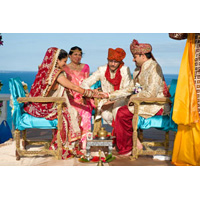 The Ecstasy of a Destination Wedding Paru and Rishi

All girls dream of being swept off their feet and being whisked away to a magical place where they will be married, and then live happily forever. Paru Mehta too had the same dream, one where she knew exactly wherer her wedding destination would be very early on in life. It was on a holiday to Puerto Rico when she was a little girl that she decided that this was the place of her dreams. Now a 24-year-old radiology resident at Shands Hospital, Paru is seeing her dreams come to life.

A grand wedding locale is only half the dream. Without a prince charming, a wedding really has no meaning at all. Paru was lucky to find her prince while studying in Miami. Rishi Modh and Paru knew each other for six years before they decided to take the plunge.

Six long years after they had grown in love, Rishi took Paru to the Biscayne Bay on the pretext of meeting friends. Then, on an isolated sailboat which was readied for the occasion, he proposed. With all arrangements including the engagement ring readied to perfection, there was no way Paru could refuse.

With just one short year in between the propsal and wedding date, much was to be done. Family friend Janardhan Dabolkar proved to be a god-send, taking personal care of all arrangements himself. While there was a lot of work that had to be done at home, there was a consultant appointed in Puerto Rico to handle all arrangements there. With the assistance of her parents and sister, Paru managed to have everything coordinated well in advance.

The wedding invitations were taken care of by Rishi’s mother, who painstakingly selected them while in India. Fashioned as scrolls, the invites, which carefully described all the events and corresponding details, made for an exquisite keepsake.

The celebrations began long before the couple and their guests even reached Puerto Rico. Given the number of guests flying in, a majority of the seats on a single plane were blocked for the wedding party. The interiors of the plane were decorated, and there was special music playing on the flight to get friends and family in the mood.

The wedding and several additional functions were all held at the El Conquistador Resort in Puerto Rico. With nearly 450 guests in attendance, it was a grand affair. For mehndi night, an Indian village was recreated, complete with tiny hanging lanterns and cotton drapes. Pillars decorated in purple and gold reflected the lighting beautifully, and the water matched the rhythm of the music. A music group, flown in from India, provided live entertainment with songs for young and old alike.

The sangeet and raas garba followed, and then finally came the day of the wedding. It was held in the afternoon against a backdrop of large white pillars. Decorations were minimal so as to bring out the scenic beauty provided by the landscape. Flower girls first entered carrying a basket of flowers. They wore blue dresses that had been hand-picked by Rishi’s mother when in India. Paru then followed, who was carried down the aisle and to the wedding area.

For the wedding and all other functions, Paru selected her ensembles from a leading store in Mumbai. She purchased her jewelry from stores in Mumbai and Dubai. For the ceremony, Paru wore a dazzling outfit in red and cream. She used minimal make up since it was a day wedding, and chose to accentuate her eyes and lips. Her hair was held up high in a bun.

After the wedding ceremony, Rishi and Paru, now officially man and wife, were driven away in an elegant horse carriage. They then began getting ready for the reception. Two ice sculptures carved as dolphins welcomed guests at the entrance. The main color theme of the reception was blue and gold, and it was apparent everywhere. With tables all around the venue, there was a special love seat made ready on the stage for the newlyweds. The tables had assignments made in the shape of butterflies with the guest’s name on it.

Speeches were made by the fathers of the bride and groom, who not only spoke of the nostalgic past, but also gave priceless advice for the future of the children. Toasts were then proposed. The wedding cake, which was specially made to be elaborate, was in the shape of a horse and carriage. The two foot tall cake had several layers, and looked as good as it tasted.

The DJ kept everyone dancing throughout the night. Combined with a local group of Latin musicians and dancers, there was much to forward to. The highlight was a performance which featured the grandparents, parents and siblings. It was followed by the bride and groom. Paru sang the first half of a song, and then danced to the rest with her husband. The floor was then thrown open to everyone. While the reception was on in full swing, special silver bowls with hand written notes from the bride and groom were placed in guest rooms as favors.

The food had to be as lavish as the wedding itself. Mr. Dabolkar personally attended to every meal, ensuring that no two meals had the same spread.

Although Paru did enjoy a spectacular wedding, she is practical and has very sound advice to give. She suggests that brides do not give the wedding too much importance, since it will be over in a matter of days. Instead, she recommends that they focus on the marriage which will last for life.

The Ecstasy of a Destination Wedding Paru and Rishi

Post Views: 546
The Secret of a Good – Wedding Planner
Of Dreams, Fairy Tales and Luxury Shetal and Dipesh