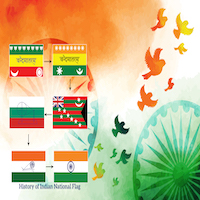 The history of India’s tricolor flag 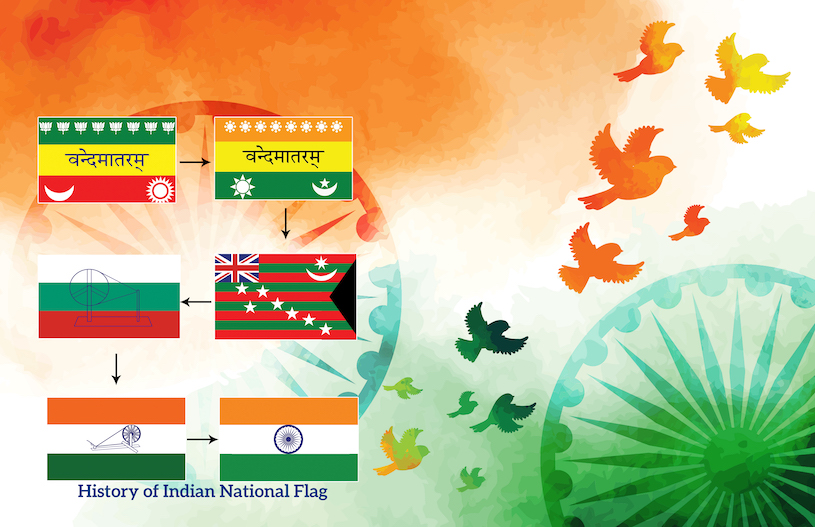 This month, India celebrates 73 years of independence. The tricolor flag – perhaps the most tangible and potent symbol of freedom from colonial servitude – is, particularly, on full display.

In 2017, a rally organised in Delhi was held under a 2,200-foot-long tricolor. At Attari, on the border of India and Pakistan, the tallest Indian flag in the country was recently mounted atop a 360-foot-high pole. In 2016, Purnia, a town in the northern state of Bihar, had a 7.1-kilometre-long tricolor. Size, it turns out, does matter.

Flag waving takes place in a wide range of locales, ranging from everyday street corners to sports matches to movie screens – in a display of both fervour and pride. The song “Maula Mere Le Le Meri Jaan” from the Hindi movie Chak De India (2007) is an example of one such moment:

“Teeja tera rang thaa main to teeja tere dhang se main to”, it intones, reflecting on the flag’s green shade: “I was your third colour, the one fashioned by you”.

Such spectacles generally come wrapped in the visual vocabulary of majoritarian politics, wherein the voices and concerns of the largest community dominate. Loyalty to the flag is never sui generis; its citizens must be inculcated to display and demonstrate patriotism in this specific way.

The vivid shades of the Indian tricolor actually have a secret subaltern history – a genealogy that has been largely forgotten. As India celebrates its independence from Britain, it’s a story worth remembering. 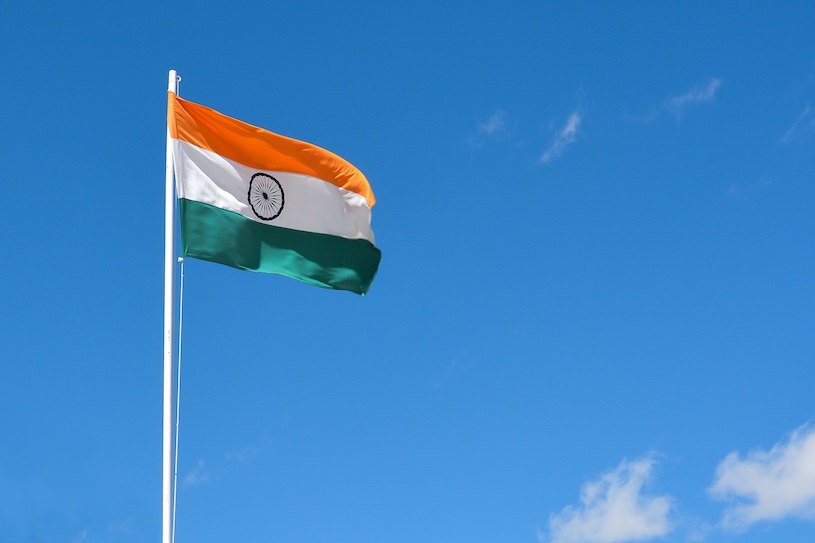 A symbol with a forgotten history

We begin this brief history with an official document called Specification for the National Flag of India (Cotton Khadi), in which the Bureau of Indian Standards prescribes that the Indian national flag shall be a tricolor consisting of three rectangular (sub)panels of equal widths.

The specified colours are “India saffron”, “white”, and “India green”. At the centre is a design portraying the Ashoka Chakra – the “wheel of peaceful change” associated with the legendary ancient emperor Ashoka from the third century BCE. The wheel is to be depicted in navy blue, the document says, before going into great technical detail on other aspects of the national flag.

Firstly, why do we call it a three-colour flag? Why has blue been erased from our cognitive frame of reference when we think about the colour scheme of India’s national flag?

Secondly, this document does not tell us anything about meanings, social significance, and popular perceptions pertaining to these four shades. We must go back in time to understand their origins.

Blue, the colour of revolt and dalit politics

In the popular memory of the colonial period, blue is the colour of resistance. Commonly associated with indigo, the shade owes its political imagery to the “Indigo revolt” (Nil vidroha), a peasant uprising against the white Indigo planters in 1859-60 in Bengal. 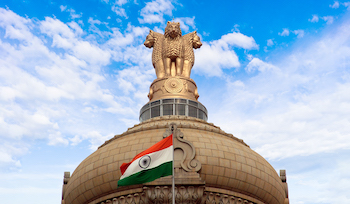 Later, in 1917, the country witnessed another massive peasant mobilisation of indigo growers, this time in the northern state of Bihar. This event was transformative – even for Mahatma Gandhi, who shifted his political attention from urban centres to rural landscapes of suffering and exploitation under the colonial regime.

It would be a fitting tribute to Gandhi and those rebellious peasants that the charka, or wheel, in the centre of the flag is in navy blue. But the wheel is bereft of Mahatma’s spindle.

“India as a nation can live and die only for the spinning wheel”, he often claimed; and this symbol occupied a central position in the model of Swaraj, or self-governance, laid out in his book Indian Home Rule.

In 1931, the Indian National Congress adopted it to don India’s pre-Independence flag as an emblem of the anti-colonial movement.

But in July 1947, just before independence, the charkha was replaced with the Ashokan wheel (chakra) in the design of India’s national flag. This irked Gandhi, who said he would “refuse to salute the flag” if it did not contain the charka.

There’s also the eerie silence about navy blue, which compels us to confront the deep political prejudices of Indian politics. That’s because its roots trace back to the dalit, to lower-caste politics. India’s most famous dalit icon – Dr. Bhimrao Ramji Ambedkar, a contemporary of Gandhi and Jawaharlal Nehru – is always portrayed wearing a blue coat. Blue is still the colour of dalit politics in modern India, too.

Is it a mere coincidence that the navy blue colour of the Ashokan wheel in the Indian national flag remains uncounted when we talk about the “tricolor flag”? Or does this gesture perhaps reveal a deep grudge against dalit politics and subaltern voices?

Another colour that deserves increased attention in any story of the flag is white. In the aforementioned official document, saffron and green are affixed with the word “Indian”, bestowing them a sense of rootedness and specific history. By contrast, white has been denied placement in a similar cultural milieu. 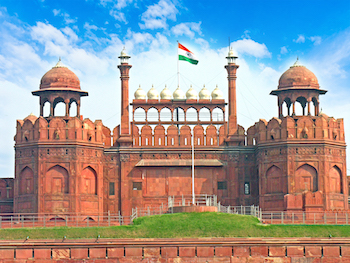 Instead, it is perceived only in the universal vocabulary as representing peace and humanism. Why this erasure of particularities?

White is perhaps the most difficult shade when it comes to telling a tale. From the bridal trousseau of the Christian tradition to the Himalayan snow-capped Mount Kailash (where, in poet Kalidasa’s Sanskrit classic Meghadutam, it represents the laugh of Hindu god Shiva), to the ubiquitous shrouding of grief in the monochromatic uniform of Hindu widowhood, the colour white is an open canvas spread far and wide.

For Gandhi (in 1921), while the flag’s red and green symbolised the Hindu and Muslim communities (respectively), white was to represent all the minority communities put together. In his scheme, they were to be protected by the other two.

Soon, however, his own party, the Indian National Congress, officially distanced itself from this direct connection between colour and community. This was particularly important in the aftermath of violence between Muslim and Hindu communities that had gripped the country in the 1920s.

Secular leaders (including the future prime minister Jawaharlal Nehru) championed saffron as a colour of valour, an ancient colour, and underplayed its popular association with the right-wing Hindu organisation the Rashtriya Swayam Sevak Sangh and its association with the 17th-century Maratha warrior king Shivaji.

Yet to this day, the colour remains well associated with Hinduism and with Hindutva, an ideology that promotes an essentialist vision of Hinduism. We have forgotten that saffron also came to India through minority religious traditions, including Buddhism; and via other ascetic religious movements, like ancient Shramanic traditions.

It is rather ironic that in today’s aggressive nationalism, India has completely forgotten the minority histories of these colours.

The amnesiac fading from memory of the green results in its acquiring a sickly, sinister pallor, considering that the outgoing vice president, Hamid Ansari, recently voiced his anxiety pertaining to the vulnerability of minority communities in contemporary India.

In the song from the film Chak De India, this anxiety is palpable. Premised upon the popular tendency to equate the colour of green with Islam, the lyrics refer to green as the third colour, using the past tense – “I was your third colour” – lamenting the Muslim’s community’s growing marginalisation in contemporary India.

This erasure of green from the present, and its exile into the past, calls for deep introspection.

Sadan Jha is the author of Reverence, Resistance and Politics of Seeing the Indian National Flag.

border of India and Pakistan

A symbol with a forgotten history