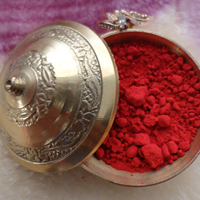 The Significance of Sindoor

India is a land of varied cultures. Indians from a wide range of backgrounds co-exist despite different traditions, rituals and customs. The world is an ardent lover and admirer of the heritage and culture that is presented by India. In spite of large-scale changes in the industrial and technology fields, Indians maintain a strong belief in the culture and traditions that they follow. Applying sindoor holds a lot of importance, and it is a tradition practiced for centuries now by Hindu women in India.

Today, many married women sport jeans, trousers or skirts. Even if not wearing sarees or adorning a traditional outfit, you may still notice these women donning a small red line of sindoor crowning their forehead, which is a deep-rooted part of Hindu rituals. Sindoor plays an important role in almost all Hindu communities.

Tradition
The journey of sindoor crowning the forehead of a Hindu woman begins during the ceremony of holy matrimony. The groom adorns her with a pinch of sindoor along the part of her hair, thus accepting the woman as his wife for the next seven lives. Considered the most important ritual of the marriage ceremony, it is also popularly known as sindoordaan. After the wedding, the wife is supposed to apply sindoor every day her husband is alive.

Traditionally, sindoor has been a part of Hindu culture for almost 5,000 years. Long-standing practice maintains that women adorn sindoor as long as she remains married and as long as her husband is living. A widow or spinster are not supposed to use sindoor per Hindu culture and mythology. The act of applying sindoor is said to be an expression of a woman’s desire that her husband live a long life. The use of sindoor by women has been well documented in Harappan excavation, Baluchistans, and epics, and even the Puranas and Soundarya Lahharis mention the use of sindoorby women in that era.

Importance
Hindu Mythology
According to Hindu mythology, it has been suggested by scholars that the red color emancipates power, and when sindoor is applied to the part of the hair, it symbolizes the energy of female divinity – Parvati and Sati. It is also believed that Goddess Parvati (wife of Lord Shiva) bestows longer life to husbands whose wives wear sindoor in their hair parting. Applying sindoor is not only considered auspicious, women also popularly believe that it wards off evil and invokes Goddess Parvatito safeguard their husbands.

Astrology
Astrologically, the house of Aries or Meshais said to be on the forehead. The Lord of Mesharashi or Aries is Mars, and the color associated with it is red, so when red sindoor is applied on the forehead, it is said to bring good fortune. Sindoor is also said to activate chakras in the forehead and crown, attracting cosmic and pranic energy, thus bestowing one with good health and prosperity.

Today, many married women sport jeans, trousers or skirts. Even if not wearing sarees or adorning a traditional outfit, you may still notice these women donning a small red line of sindoor crowning their forehead, which is a deep-rooted part of Hindu rituals. Sindoor plays an important role in almost all Hindu communities.