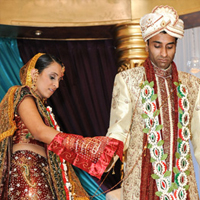 Wedding Garland: The Ritual of Varmala 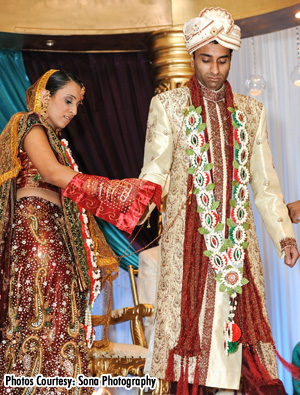 Marriage is a reality clothed in the magical attire of fantasy. It is a fairy tale that has its charming tentacles all over our minds and matter. Most often parents live to see this auspicious occasion in their young one’s lives. Sons and daughters wait to receive blessings from their elder generation on this day. This is the day when two minds unite in a bond of infinite love and endless possibilitiess of all their “firsts.” She then found Anil who was down on his knees holding a diamondring.

Different cultures have different ways of celebrating this spotlight-occasion. The Indian way of marriage is well-known throughout the world as one of the most extravagant and lavish ceremonies. Its charm and brilliance draw people even from other parts of the world to celebrate their one and only best occasion in the Indian way.

One important aspect of the Indian marriage is the varmala. Varmala is also known as jaimala. This is a garland, sewn with flowers of different colours. Although there are different occasions in which such garlands are being used, like welcoming a guest into the house or respecting a chief guest or in order to celebrate the victory of a person in some competitions, varmala is the specially made marriage garland. Varmala is exchanged between the bride and groom during the marriage.

Marriage is the occasion of the first big and socially accepted exchange between two people. The two human beings who expect a life together with dreams and many prospects come together and through the exchange of the varmala to become one. The concept of varmala is as old as the Indian civilization.

Several details of garlands and Varlama ceremony can be traced back to ancient Indian epics, where not just humans, but even gods and goddesses have the Varmaala ceremony before marriage. This proves that Varmala exchange is a ritual that was part of the Vedic culture. The ritual started in prehistoric times when husbands were chosen in “Swayamvar”. In swayamvar, it is said that a list of suitors would be invited and when the girl from the list of suitors would identify the husband she wishes for she would garland them. This ritual was called Jaimala. It is an important ritual in Hindu matrimonial ceremony since it is the first ritual which signifies that socially the bride has accepted groom has her husband.

Mostly, varmalas are made of rose flowers and jasmine along with other decorative shiny adornments. The fragrance of roses is kept intact and jasmine flowers add to the beauty of it. These days’ artificial flowersvarmalasare in fashion too, these are usually made of fabric, net, embellishments and foil. Apart from being a cheaper, viable option, and having a longer shelf life, the benefit with these varmalas is that they do not leave color stain on expensive trousseau unlike the real flowers.

The first turn is of the bride’s to garland her prospective husband and welcome him with flowers. She has to put the garland around the groom’s neck. In North Indian marriages, there would be a friendly hassle between the party with bride and groom in an attempt to help each of them put the varmala on each other. Finally, the groom decorates the bride’s neck with the varmala in his hand too.

This denotes the commencement of the matrimonial ceremony. The jaimala ceremony indicates the value of sharing and suggests the magnitude of love and harmony. Only through the fragrance of love can they conquer each other. This being the message of jailama ceremony, it still continues as a legacy of the Vedic tradition.

Wedding Garland: The Ritual of Varmala