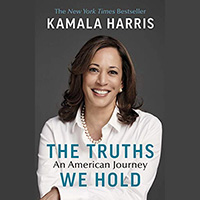 The Truths We Hold: An American Journey 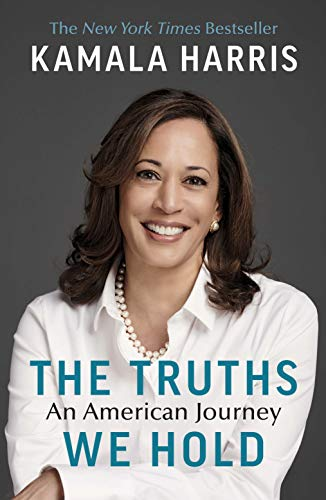 The daughter of immigrants and civil rights activists, Vice President Kamala Harris was raised in a California community that cared deeply about social justice. As she rose to prominence as a political leader, her experiences would become her guiding light as she grappled with an array of complex issues and learned to bring a voice to the voiceless.

Now, in The Truths We Hold, Harris reckons with the big challenges we face together. Drawing on the hard-won wisdom and insight from her own career and the work of those who have most inspired her, she communicates a vision of shared struggle, shared purpose, and shared values as we confront the great work of our day.

“My mother had been raised in a household where political activism and civic leadership came naturally. Her mother, my grandmother, Rajam Gopalan, had never attended high school, but she was a skilled community organizer. She would take in women who were being abused by their husbands, and then she’d call the husbands and tell them they’d better shape up or she would take care of them. She used to gather village women together, educating them about contraception. My grandfather P. V. Gopalan had been part of the movement to win India’s independence. Eventually, as a senior diplomat in the Indian government, he and my grandmother had spent time living in Zambia after it gained independence, helping to settle refugees. He used to joke that my grandmother’s activism would get him in trouble one day. But he knew that was never going to stop her. From them, my mother learned that it was service to others that gave life purpose and meaning. And from my mother, Maya and I learned the same.”

“My mother was expected to return to India after she completed her degree. Her parents had an arranged marriage. It was assumed my mother would follow a similar path. But fate had other plans. She and my father met and fell in love at Berkeley while participating in the civil rights movement. Her marriage–and her decision to stay in the United States–were the ultimate acts of self determination and love.”

“They lived many thousands of miles away, and we rarely saw one another. Still, through many long-distance calls, our periodic trips to India, and letters and cards written back and forth, our sense of family–of closeness and comfort and trust–was able to penetrate the distance. It’s how I first really learned that you can have very close relationships with people, even if it’s not on a daily basis. We were always there for one another, regardless of what form that would take.”

“My mother, grandparents, aunts, and uncle instilled us with pride in our South Asian roots. Our classical Indian names harked back to our heritage, and we were raised with a strong awareness of and appreciation for Indian culture. All of my mother’s words of affection or frustration came out in her mother tongue–which seems fitting to me, since the purity of those emotions is what I associate with my mother most of all.”

“My mother inherited my grandmother’s strength and courage, People who knew them knew not to mess with either. And from both of my grandparents, my mother developed a keen political consciousness. She was conscious of history, conscious of struggle, conscious of inequities. She was born with a sense of justice imprinted on her soul.”

“My mother understood very well that she was raising two black daughters. She knew that her adopted homeland would see Maya and me as black girls, and she was determined to make sure we would grow into confident, proud black women.”