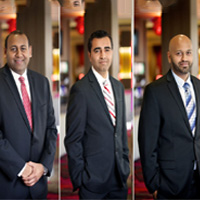 Bright Force Holding, LLC has acquired American Bank, N.A., a community bank located in North Dallas with almost $55 million in assets.  The purchase will be effective at the close of business on March 8, 2019.

Bright Force Holding, based in the Dallas suburb of Lewisville, Texas, is an investment group that consists of three prominent Indian American ( NRIS) business leaders – Mehul Patel, Chirag Patel, and Mital Patel.These investors serve as senior executives with NewcrestImage, a hotel development and management company that operates a portfolio of 28 properties.

The three investors will become members of American Bank’s board of directors, joining three directors who currently serve: veterani Texas banker John Goforth, who will also remain President and CEO of the bank; and business executives Mark Kelly and Jake Menefee.

“We will maintain the highly-personalized service that customers have come to expect from American Bank,” said Chirag “Chuck” Patel, the bank’s new Chairman of the Board.“In addition, we see a tremendous opportunity to introduce new banking services – such as the sophisticated, forward-looking solutions that young entrepreneurs and start-up companies expect.”

Added Patel, “We understand first-hand the challenges and priorities that owners of small and medium-sized businesses have for fast, local decision-making without bureaucracy.”

“We have created a community bank where customers are known by their name, not their account number,” explained John Goforth, who has served as President and CEO of American Bank since 2010.  “Our priority is to enhance and build on the bank’s well-deserved reputation for being convenient and competitive – the bank that can meet all of your banking needs with one stop or one call.”

Community News
Get your ZZZs: Ways to Enhance Your Sleep Health