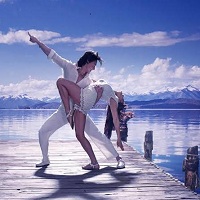 Tiger and Jaq’s magical act is the biggest romantic song to date!

When Tiger Shroff and Remo D’souza come together, one can only expect the unexpected.

The romantic song from their forthcoming film ‘A Flying Jatt’, captures the sizzling chemistry between the lead pair – Tiger Shroff and Jaqueline Fernandes amidst breathtaking visuals!

It stands as one of the biggest romantic songs to date, which was shot over 10 days.

The thought was that everything about the song was supposed to be magical – from Jaqueline walking on water, to the aerial acts- the scale and magic is beyond what has been seen so far.

Sung by Atif Aslam, the song had the lead pair suspended midair for their aerial acts for hours, across 10days. As breezy as they made it appear, Romance doesn’t come easy after all!

The song has already crossed over 4 million views!

Produced by Balaji Motion Pictures and directed by Remo Dsouza, A Flying Jatt stars Tiger Shroff, Jacqueline Fernandez and Nathan Jones. The film is slated to release on August 25th, 2016.