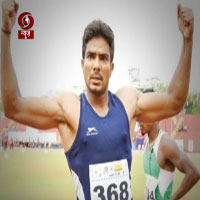 Indian 200 meter sprinter Dharambir Singh, who became the first Indian athlete to qualify for the Olympics after 36 years, has not traveled to Rio for the Games.

Reports suggest that he has reportedly been told to stay back after failing a drugs test conducted by NADA.

The final word on this is still awaited.

Dharambir Singh passed the Olympic mark of 20.50 secs with a timing of 20.45 secs at the Indian Grand Prix Athletics event in Bangalore in July 2016.

Post Views: 944
2nd Test: India 6 wickets away from an emphatic win against Windies
Tiger and Jaq’s magical act is the biggest romantic song to date!