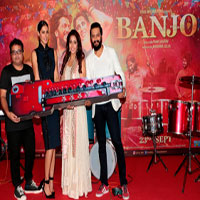 Earthy, real and fascinating is what describes Eros International’s Banjo trailer. The musical trailer that brings to light the concept of street musicians and the journey of the Banjo players is the first for a mainstream Hindi cinema.

With live performances by Riteish and Nargis along with real banjo players, the event turned out to be a musical extravaganza! Interestingly, the same banjo players who are part of ‘Lalbaug Beats’ banjo group from Mumbai’s Lalbaug area have also been part of the film. The musicians played iconic Bollywood tunes that used Banjo in their compositions at the event.

Producer Krishika Lulla says, “At Eros, we always believe in exploring different subjects and I don’t think anybody has ever explored the concept of street musicians in Bollywood. Banjo is a beautiful story and an interesting team put together. I’m very proud of Banjo.”

Says Riteish Deshmukh, “Watching banjo players during festivals always attracted me. Working on Banjo fulfilled my dream and wish to play the instrument. Banjo is special because like the Banjo group members, the team working on the film is equally great. All of them make my experience special.”

Nargis Fakhri adds, “It’s the story of the street players and their hope of making it big which was quite fascinating. It truly resonates with your soul. I’m grateful to Krishika Lulla for having me be part of the film.”

Says Ravi Jadhav, “Our country is full of talented artists. You can spot talent at every corner. Banjo is about street musicians and their dreams to get a stage to showcase their talent. The music they create has a universal appeal. Banjo is dedicated to all the street musicians who aspire to make it big.”

Prateik Babbar: Deepika would be ideal to play Smita Patil in her biopic
A message a day can now keep the Diabetes away