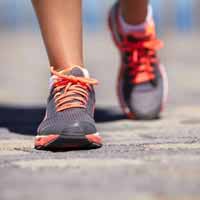 Walking for just 30 minutes three times per week could improve the quality of life for those with advanced cancer, a new study has found.

Researchers from the University of Surrey and King’s College London in the UK explored the impact of walking on the quality of life and symptom severity in patients with advanced cancer.

Initiatives in place to promote physical activity for those suffering with cancer are normally supervised and require travel to specialist facilities, placing an additional burden on patients.

During the study 42 cancer patients were split into two groups. Group one received coaching from an initiative which included a short motivational interview, the recommendation to walk for at least 30 minutes on alternate days and attend a volunteer-led group walk weekly.

The health benefits of walking are well documented, with improved cardio vascular strength and increased energy levels. Group two was encouraged to maintain their current level of activity.

Researchers found that those in group one reported an improvement in physical, emotional and psychological wellbeing having completed the programme. Many participants noted that walking provided an improved positive attitude towards their illness and spoke of the social benefits of participating in group walks.

“The importance of exercise in preventing cancer recurrence and managing other chronic illnesses is becoming clear,” said Emma Ream from the University of Surrey. “Findings from this important study show that exercise is valued by, suitable for, and beneficial to people with advanced cancer,” said Ream.

“Rather than shying away from exercise people with advanced disease should be encouraged to be more active and incorporate exercise into their daily lives where possible,” Ream added.

“This study is a first step towards exploring how walking can help people living with advanced cancer,” said lead researcher Jo Armes from King’s College London. “Walking is a free and accessible form of physical activity, and patients reported that it made a real difference to their quality of life,” said Armes.

“Further research is needed with a larger number of people to provide definitive evidence that walking improves both health outcomes and social and emotional wellbeing in this group of people,” Armes added.

The study was published in the journal BMJ Open.