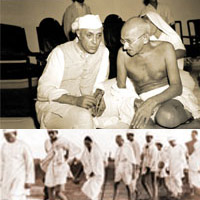 What Would Gandhiji Do? 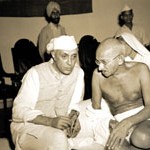 Immediately after the September 11, 2001, attacks on the World Trade Center and the Pentagon, the idea of taking a nonviolent stance in response to terrorism would have been dismissed out of hand. It is in this context that various forms of less militant response, adopted by Mahatma Gandhi, deserve a second look.

Mahatma Gandhi, a champion of non-violence, seeing the present plight of the world in terms of the violence rate would have sought united, determined, and decisive action against international terrorism as no cause or religion justifies the menace whatever be the objective. Gandhiji’s principle of non-violence is applicable across fields from terrorism to non-proliferation to economic disparities, and the world could ignore his principles at its own peril. Gandhi’s firm belief that means are as important as the ends, he asserted that the principles could not be flexible, truth is not a convenience, and conviction cannot be bartered on the altar of expediency.

In fighting terrorism, the Gandhian reaction cannot be seen as taking mainly the form of earnest discussion with terrorists to stop from doing dishonorable things, but to create a society based on the principle of non-violence, where man’s freedom alone would be safe and mankind would be free from repression and tyranny, whereby peaceful social life is ensured.

A Gandhian strategy for confronting terrorism, therefore, would consist of the following:

National security should be depoliticized as it is important to recognize that terrorist attacks in the world as well as in our country have been continuous and have taken a heavy human toll, affecting the development of countries.
All citizens should be treated equally and should be able to secure redress of their grievances through constitutional methods – then no one would likely risk his/her life and lives of his near and dear in the foolish adventure of terrorism.

India was on the verge of a violent confrontation with Britain when, in 1915, Gandhi was brought into India’s independence movement from South Africa, where as a lawyer he had been a leader in the struggle for social equality for immigrant Indians. In India, as in South Africa, the British had overwhelming military superiority and were not afraid to use it. Responding to terrorism after the fact, however, is quite a different matter. What Gandhi argued in Hind Swaraj was that violence never works as a response to violence. It usually generates more violence as a result, and precipitates a seemingly endless litany of tit-for-tat militant engagements.

Gandhi was adamantly opposed to political positions that justified terrorism, but he was remarkably lenient toward the terrorists themselves. In the case of the assassination that occurred when Gandhi was in London in 1909, he did not blame Madan Lal Dhingra, the assassin of Curzon-Wyllie. He said that Dhingra as a person was not the main problem. Instead, Gandhi said “he was like a drunkard, in the grip of a mad idea.” The difficulty was the mad idea, not the terrorists. Though he might have justified killing them if he had caught them in the act, after their tragic mission was over, Gandhi’s attitude toward those who carried out terrorist acts was more of pity than of revenge. He would not let them go free, of course, but he treated them as misguided soldiers rather than as monsters.

Gandhi’s main tactic in his fight was what he called Satyagraha, meaning “soul-force,” which took the form of civil disobedience and non-cooperation with evil. Civil disobedience involved breaking a specific law if it was believed to be unjust, and then facing the consequences. The Salt March of 1930 was a vital step toward India’s independence from Britain. Gandhi led masses of Indians into a program of massive disobedience to British law, and what was most important was that Indians used neither violence nor hatred in their fight for freedom. The Salt March of 1930 was one of Gandhi’s greatest successes in civil disobedience. Salt was necessary to the life of Indian farmers’ cattle, and the British monopoly on salt production had led to massive taxes on the vital substance.

Gandhi was dismayed by Hinduism’s treatment of the Muslim minority in India, and by the resulting calls for the creation of a separate Muslim state of Pakistan. Widespread distrust and hatred was growing between Hindus and Muslims and, on the eve of India’s independence, riots erupted all over India. The country became a bloodbath. Many believed that Gandhi’s non-violence had failed, but he spent his time in the most violent areas and each night he preached peace and love as he prayed and walked from village to village through the heart of that violent madness.

In a world seemingly dominated by violence and hatred, Mahatma Gandhi reincarnated the ancient idea of Ahimsa, non-violence, as the only way of living in peace. His example influenced and inspired many later peaceful struggles, for example the civil rights movement of Martin Luther King, Jr. Despite India’s shortcomings, Gandhi never lost faith in Ahimsa.