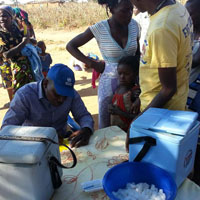 The World Health Organization (WHO) said it would help Angola and the Democratic Republic of Congo launch a mass vaccination campaign against a yellow fever outbreak ravaging the two countries.

The campaign will aim to immunise 15.5 million people in the two countries by the end of August, Bruce Aylward, the WHO’s chief on outbreaks and health emergencies, told reporters. He described it as “an unprecedented push.”

Yellow fever has been raging in Angola since December, especially in the capital Luanda, where there have been 3,552 suspected cases, 875 confirmed cases and 355 deaths.

Cases have been imported to Kinshasa in DR Congo, where the virus has begun spreading locally and is believed to have killed 75 people.

The country has recorded 1,300 suspected cases, and 68 confirmed cases — 59 of which are direct importations from Angola.

But seven were spread locally on the ground, “and that is what we are trying to stop very, very quickly,” Aylward said. WHO has for months been voicing alarm about the urban nature of the outbreak, and the potential for “explosive spread”.

The two affected countries have already made “a huge effort” to rein in the outbreak, Aylward said, pointing out that some 14.5 million people have already been vaccinated, most of them in Angola, helping slow the outbreak considerably.

The idea now is to quickly more than double that number during the so-called “dry season”, when there is least risk of spread, immunising some eight million people in Kinshasa, three million more inside Angola and another 4.3 million along the border between the two countries.

There is no specific treatment for yellow fever, a viral haemorrhagic disease transmitted in urban settings mainly by the Aedes aegypti mosquito, which also spreads Zika, dengue and chikungunya.

The disease can have a mortality rate of up to 50 per cent, but is often not considered as big a threat as Ebola or Zika, since there has long been a very efficient vaccine against it, Aylward said. Yet the percentage of people immunised against yellow fever remains low in many parts of Africa.

It costs about USD 2.50 to vaccinate one person, bringing the total cost of the planned push to USD 34 million, of which USD 14 million is already funded, according to WHO.

The organisation has been informing international donors of the desperate need for the additional cash, Aylward said, adding that Angola and DR Congo would also pay a large portion of the bill.

WHO has urged vaccination of all travellers to and from Angola and DR Congo to keep the outbreak from spreading, but has stopped short of declaring the situation a global health emergency.