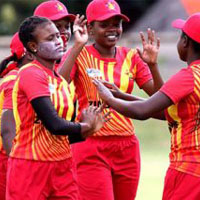 Two teams will book their spots for next year’s ICC Women’s World Cup qualifier in events to be played in different parts of the world this month.

The Europe qualifier in the English county of Essex from 12-15 July will feature the Netherlands and Scotland while the East Asia Pacific qualifier in Samoa from 15-23 July will see Samoa, Papua New Guinea and Japan fight it out on a double round-robin format.

Bangladesh and Ireland have already made it to the ICC Women’s World Cup qualifier by virtue of their ODI status while Zimbabwe has come through by winning the Africa qualifier. One more team will advance from the Asia qualifier event in October which will feature host Hong Kong, China, Nepal and Thailand.

The bottom four teams from the ongoing eight-team ICC Women’s Championship that finishes in November this year, will also play in the qualifying tournament.

The ICC Women’s World Cup 2017 will be held in England with Derbyshire, Gloucestershire, Leicestershire and Somerset hosting the matches. The tournament will be played in a single-league format with the top four teams making the semifinals. The final will be played at Lord’s.