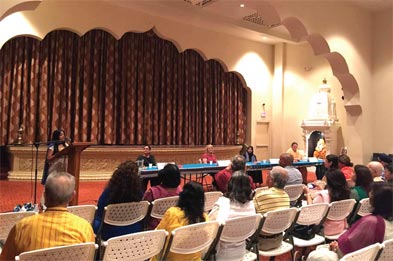 In this and future issues, Desh-Videsh will feature speeches by the participants. Manju Kalidindi, one of the organizers, offers insight into the event below.

“God has made different religions to suit different aspirations, times, and countries. All doctrines are only so many paths; but a path is by no means God Himself. Indeed, one can reach God if one follows any of the paths with whole-hearted devotion. One may eat a cake with icing either straight or sideways. It is sweet either way.” – Sri Ramakrishna

Historically religion has been contentious, possibly due to the fact that most of us are ignorant of other faiths. This lack of knowledge has led to tension and conflict. Being educated about each others’ religions might facilitate understanding of and respect for faiths other than our own. We might also learn that the basic tenets of any religion are similar such as love, peace, compassion.  No religion is inherently superior or inferior.

That which most of us call a soul, a spirit, consciousness, energy has no gender. Legal standards and social science seem to affirm the equality of all human beings. However, discrimination against women remains one of the most widespread injustices today. In some countries marital rape is not a crime; in others, women have no right to divorce or to inherit; while in most there is no equal right of pay.

Have women’s roles been traditionally defined by religious scriptures or their interpretation? Has religious dogma contributed to the status of women in society? Historically, most of humanity has looked to religions and their leaders for guidance. There is a need to address discrimination against women based on religion or interpretation of religion.

Religious leaders can play a role in addressing the injustices that prevent women from developing their innate potential and fully participating in the advancement of society.