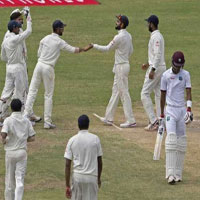 2nd Test: India 6 wickets away from an emphatic win against Windies

West Indies’ vulnerable top order crumbled again to be 48 for four in their second innings on a rain-ruined fourth day of the second Test against India at Jamaica.

Rain played hide-and-seek at Sabina Park as the hosts lost four wickets by lunch with only 15.5 overs being bowled.

Indian bowlers made the most of overcast conditions and a pitch affected by rain.

The ball swung nicely and Ishant took just two overs to deal West Indies the first blow in Rajesh Chandrika, who fell to one of the most awkward dismissals in recent memory.

However, rains eventually prevented a restart during the day, and the West Indies batsmen will hope the weather intervenes again on the final day to help them avoid another innings defeat.