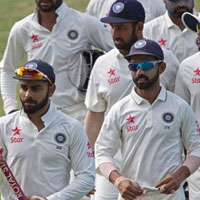 Bolstered by the comprehensive win in the series opener, an upbeat India will look to assert their supremacy over an inexperienced West Indies with yet another commanding show in the second cricket Test, starting at Kingston on Saturday.

The ‘Men In Blue’ made a confident start to the 2016-17 season, recording India’s biggest win outside the sub-continent when they thrashed the hosts by an innings and 92 runs in the opening cricket Test.

India will look to continue in the same vein in the tour, which is Anil Kumble’s debut series as chief coach of the team.

But it would be easier said than done as a green pitch awaits the visitors at Sabina Parka, a stark contrast to the conditions on offer in Antigua, where the visitors had won the match in four days.

Going by past records, it was way back in 2008 when a Test lasted five days at Sabina Park which Australia won by 98 runs. Since then, five Tests have taken place here and all of them have finished within four days, including India’s 63-run win in 2011.

West Indies’ last Test here was against Australia in the summer of 2015, and that match finished past lunch on the fourth day.

Given the very evident gulf between the two teams at present, the grassy wicket should expedite matters in this forthcoming match as well.

While it is tough to say which team will be happier to see the green pitch, the hosts will surely feel that the equation will perhaps be more balanced.

The big win in Antigua doesn’t mean India will be complacent going into the second Test. The big difference in conditions on offer will obviously hinder any such thoughts, as will the fact that there are still three more Tests to go on this tour and their job has only just begun.

While India will find comfort in a settled line-up, there are some obvious points to ponder over like fitness of opener Murali Vijay.

Uncertainity lies over Vijay’s availability in the seond Test as still there is no confirmation on where he is fit enough to play or not.

The opener has been missing action since being hit on his thumb by Shannon Gabriel on the first morning of the series, and didn’t field for a single minute in the West Indies’ two innings last week.

In the lead-up to the upcoming Test, Vijay batted a bit in the nets on Wednesday but skipped the optional practice session yesterday. But the question remains, whether the team management would be willing to risk playing Vijay when they have another opener available in KL Rahul, who scored runs in the practice games ahead of the Test series.

The other issue is about the team combination, and whether skipper Virat Kohli will opt for a five bowler attack once again.

During the home series against South Africa last year, he had moved away from this strategy when faced with difficult wickets. At the same time, on a greenish wicket in the third Test against Sri Lanka previously, he had opted for Stuart Binny.

If West Indies do pick another pacer, or even two more, an additional full-time batsman would mark a conservative selection on Kohli’s part, especially since India’s three frontline batsmen – Vijay, Cheteshwar Pujara and Ajinkya Rahane – contributed only 45 out of 566 runs in Antigua.

At the same time, Kohli also has to think about his bowlers’ workload in what will prove to be a long season. Playing a full-time batsman will mean added overs for his three pacers and one less bowler to choose from.

And so it could tempt him to go in with Binny instead, who provides him a medium-pace option as well as adds to the lower middle-order.

Either way, Amit Mishra is expected to sit out in Jamaica as his spin partner Ravichandran Ashwin’s shone bright in the first Test with his all-round performance.

Ashwin followed up his 113-run knock in India’s only batting effort in Antigua with a match-winning 7 for 83-run spell in West Indies second innings to set up the huge win.

On a green pitch, the visitors’ three pacers – Ishant Sharma, Umesh Yadav and Mohammed Shami – will once again prove to be more than a handful for West Indies batsmen, who have failed on both occasions in Antigua.

The Caribbeans will be thinking about boosting their bowling attack and the inclusion of rookie pacer Alzarri Joseph comes as a welcome move.

19-year-old Joseph could be in line to make his Test debut as will be 25-year-old Miguel Cummins, who was ignored for the Antigua match.

Joseph made an impression in the Under-19 World Cup in Bangladesh, helping the West Indies lift the crown with a 13-wicket haul in that tournament, while Cummins is known to work up good pace. Both the bowlers will play an ideal foil to Shannon Gabriel with the new ball.

If West Indies are tempted to play both the newcomers, it might weaken the batting, given that skipper Holder had stacked his playing eleven up to No.9 in the first Test.

That conservative ploy didn’t work out too well against the discipline of India’s five-pronged attack in Antigua.

Among the West Indies batsmen, Marlon Samuels will be in the spotlight as since the end of the first Test, rumour has been swirling about his future with some suggesting that the 35-year-old could be playing his last Test series.

All eyes in Kingston will be on Samuels as it remains to be seen whether he can follow up his half-century in the second innings in Antigua and make a bigger impact here on his home ground.