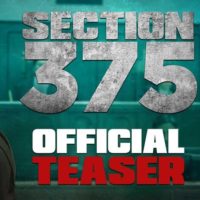 It seems to be raining trailers in Bollywood this week. So far, we have seen three amazing film trailers being released- Prabhas and Shraddha Kapoor’s Saaho, Ayushmann Khurrana’s Dream Girl, and Akshaye Khanna and Richa Chaddha’s Section 375. 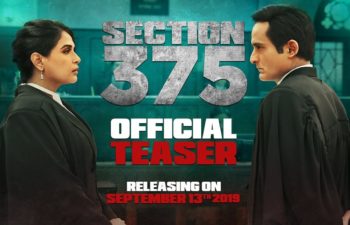 Akshaye Khanna and Richa Chadha’s Section 375 is an edgy courtroom drama touching upon Section 375 of the Indian Penal Code. In the film, Akshaye and Richa are playing lawyers who are on opposing sides. In the trailer, while Richa’s character is seen fighting for a rape victim, Akshaye character is defending the accused. The film, directed by Ajal Bahl, has been inspired by real-life cases. This is Akshaye’s second film this year; he was earlier seen playing a pivotal role in Anupam Kher’s The Accidental Prime Minister.

Another trailer launched this week was Ayushmann Khurrana and Nushrat Bharucha starrer Dream Girl. In the trailer, Ayushmann shows his feminine side, and it won’t be wrong to say that he plays both the hero and the heroine of the film. Ayushmann plays a call center executive who uses a feminine voice while speaking to his customers. The mess starts when the customers with whom he flirts using his feminine persona, Pooja, fall in love with him/her. Ayushmann is currently riding high on the success of Badhaai Ho, Andhadhun, and Article 15. And he recently won the National Film Award for Best Actor for Andhadhun.

The third trailer that just launched is Saaho. The film starring Baahubali actor Prabhas and Shraddha Kapoor is an action thriller. The fans had been eagerly waiting for this trailer, as the film’s teaser and two songs had been launched long-time back.

Saaho releases on August 30, while Section 375 and Dream Girl will hit the theaters on September 13.