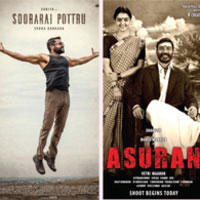 The Golden Globe Awards are the first of the many prestigious events of 2021. Before the Los Angeles based award ceremony, lists of the foreign films that are to be screened were released. Four South Indian movies are included in the Golden Globe movie nominations this year.

Soorarai Pottru features Aparna Balamurali in the title role. The movie is directed by Sudha Kongara and narrates the life of Captain Gopinath. Soorarai Pottru released in Amazon Prime in November.

Asuran features Manju Warrier and Dhanush in the titular roles. This 2019 movie under the direction of Vetrimaaran claimed four national awards and is a cinematic representation of Poomani’s novel Vekkai.

Tanhaji was one of Bollywood’s highest grossing movies of 2020. The Om Raut directed war epic is an ode to Shivaji’s right hand, the underrepresented Tanhaji who was a valiant warrior. The movie stars Ajay Devgan, Kajol, Saif Ali Khan and Sharad Kelkar in lead roles.

Jallikattu is India’s official submission for the Oscars. This is a Malayalam movie directed by Lijo Jose Pellissery. The movie stars Antony Varghese, Sabumon Abdusamad, Chemban Vinod Jose and Santhy Balachandran in the lead roles.

Here are a few other Indian movies to be screened during the award ceremony:

Harami, directed by Shyam Madiraju is a modernistic translation of Charles Dickens’ novel Oliver Twist. The movie is a statement on the serious power struggle amongst different classes of people in the society.

Aise Hi is the first work of debut director Kislay. The movie narrates the tale of an old Indian woman who decides to live life for herself.

Trees Under the Sun is a Malayalam movie that is directed by Bijukumar Damodaran. The film stars Prakash Bare and Indrans in title roles. The movie is called Veyil Maranangal in Malayalam.

Trees Under the Sun