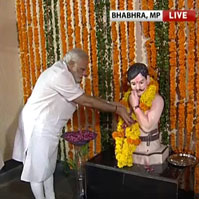 Narendra Modi is the first Prime Minister to visit the birth place of revolutionary leader Chandrashekhar Azad at Bhabhra in Madhya Pradesh’s Alirajpur district where he launched ‘Azadi 70 Saal, Yaad Karo Kurbani’ campaign to commemorate the sacrifices of freedom fighters on the Quit India day on Tuesday.

BJP government in Madhya Pradesh has changed the name of Bhabhra as “Chandrashekhar Azad Nagar” in memory of the revolutionary leader.

The house where he was born on July 23, 1906 was developed into a memorial and named as “Azaad Smriti Mandir.

India all set to celebrate its 70th year of Independence and 75th year of Quit India movement.

the government has planned an initiative to instill the spirit of patriotism among citizens.

PM will be visited a memorial that has been set up in memory of Chandra Shekhar Azad at Bhabhra.

He will also address a public meeting. 75 ministers of the Union cabinet will act as the flag bearers of this programme.

They will fan across the country to recount the sacrifices made by freedom fighters and the turning point events that led to India’s independence by visiting historical places associated with the freedom struggle.