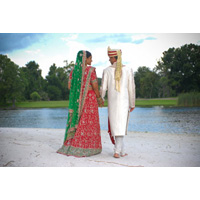 A New Journey Begins Together

A film-like wedding story of a girl and a boy who meet, became friends, fall for each other, then part ways, only to reunite – this time forever. 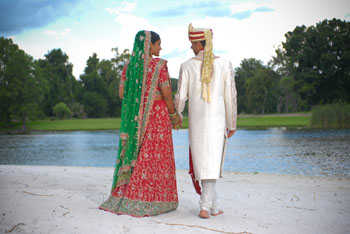 The friendship between Radha and Mahesh that began at Duke University grew through chance meetings. It continued to strengthen when the two went to Washington, DC, for internships. A tennis game date with Radha watching and Mahesh playing, ended with the first sweet kiss – a transgression from friendship to love. The teens graduated and became professionals. Work led them to distant places. Understanding the complications in a long-distance relationship, the two soon decided to part ways but still remained friends.

It took twelve long years for them to understand that they indeed were soul mates, inseparable. 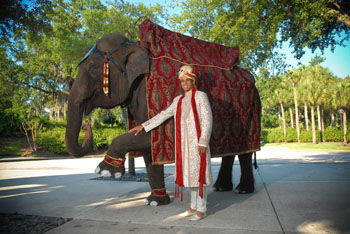 Mahesh did an extensive research on diamond rings, and made several rounds to the wholesalers and jewelers all around. He finally settled for one. Mahesh planned a weekend trip to Clearwater beach of Tampa Bay area. Setting the tune for the evening, Mahesh took Radha for an exotic lunch at the Hispanic beachfront restaurant – Columbia. After lunch, enjoyed a luxurious couples massage at Sand pearl Spa Resort.

Then Mahesh rushed her to the hotel – The Renaissance Vinoy. At the balcony of the hotel suite, with the scenic harbor view in the background, Mahesh went on one knee and officially proposed Radha. Goes without saying, Radha accepted.

Knocking on the door, soon after the proposal and acceptance, was a bunch of unexpected guests – the couple’s families. Mahesh had already taken their consent. The proposal plan worked out perfectly. Only that the plane with banner flying behind… “RADHA, WILL YOU MARRY ME?” while the two were standing in the balcony, as planned by Mahesh didn’t appear. The cloudy sky that evening didn’t let the flight take-off. 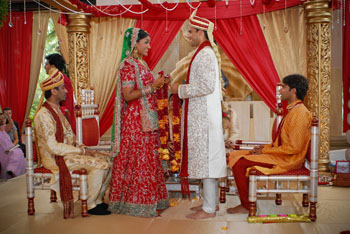 The Wedding Plan
Orlando offered an excellent location for the event since the couple wanted the guests and their families have a blast at Orlando’s theme parks. That’s why they chose to have the wedding on a holiday weekend, Memorial Day Weekend. The Grand Cypress Hyatt was the venue of choice due to its beautiful architecture and trusted advice from the their Event Specialist, Angela Palacio.

The Garba and Raas took place in the Hyatt Ballroom. The Garba-Raas Gator group as well as a Bhangra Gator Group performed in between the Garba and the Raas. A dhol player was present to keep the music of the occasion festive and live.

Jilna of Suhaag played a key role in translating the dream vision of the couple into a real life event. Not only did she translate the duo’s vision for the entire week of events into an exact reality but also garnished with additional surprises in the final décor. The additions were more than welcome. 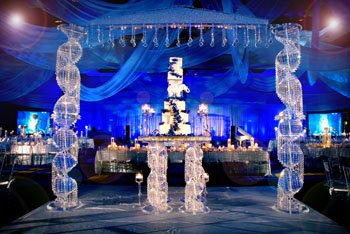 The Wedding Ceremony was staged as a traditional Royal Indian wedding in a gold, red, green, and ivory theme. The elegant ceremony remained short and timely. The priest, Mahesh Gor, with an eye for frames proved to be a fantastic key-man for the photographer, DJ, and the videographer. At the end of the ceremony, Mahesh and Radha exchanged personal vows. As a traditional Hindu ceremony, the priest recited shlokas in Sanskrit and one of Radha’s uncles interpreted the recital.

Radha appeared for the ceremony by walking down a spiral staircase. At the bottom of the staircase, she was greeted by her mamas (mother’s brothers), who were followed by her brother and her father.

Music for each of the events the events was kept as personal as possible. The tracks included original music written and composed by Radha and her brother. Special performances of the evening included the Father-Daughter Dance to the track “Pull Me From Heaven,” the First Dance to “Love Me Right,” and a special piano performance by the bride’s brother. Radha herself wrote “Pull Me From Heaven” signifying times soon after her birth. She as a baby had almost died due to a fatal illness. Her parent’s faith in God made her survive. During the wedding ceremony, Radha chose to walk down the aisle to “Latika’s Theme” from Slumdog Millionaire. In this special version, the voice-overs in the track were pre-recorded by Mahesh and Radha.

The final production truly represented east meets west entertainment. It began with Bharatnatyam dancers, followed by fusion dancers, and ended with Cirque performers in an aerial performance. DJ Firoz was called in for the evening and dhol player Sunny added to the fun for bhangra enthusiasts. Dancers from the University of Florida included the groups of Bhangra, Garba, Fusion, and Bharatnatyam.

Bridal attire
Radha’s clothing and jewelry was all custom-made and bought in India. Her wedding dress prominently displayed her favorite colors, red and green, and less of the typical red and white or red and gold. She wanted the outfits to look rich with a lot of embroidery, but not over the top. For the Garba Raas, Radha dressed in blue to match the festive and colorful peacock theme.

Radha’s reception dress precisely met her personal vision that she had visualized since her teenage days. She always wanted to marry according to Indian traditions and style, but was also enamored by the ‘white dress.’ She herself designed the dress to look like a crystal princess. And so she was. Her jewelry too was magnificent, very bright and catchy, especially on camera.

The Wedding Cake
The cake looked grand! It was about five feet high on its own platform. A crystal gateway was created for the cake with hanging Swarovski crystals. In the middle of the cake, there was a large white crystal shimmering elephant. It was a centerpiece all on its own.

The wedding events and personal touches truly captured the essence of Mahesh and Radha’s personalities and their romance!