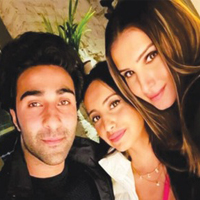 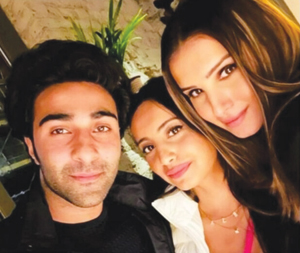 Bollywood actress Tara Sutaria is enjoying her vacation in Paris with beau Aadar Jain in total style and beauty. They seem to be having a gala time before the festival season in India. They are accompanied by Tara’a friend Alekha Advani. Sutaria and Jain have each shared beautiful pictures of their vacation. One of them shows a super-stylish Sutaria in a black crop top with cargo pants and boots sitting casually on the stairs of an ancient building; another is with a standing pose.

Jain posted a picture of himself walking on the streets of Paris. He was looking handsome in black trousers, a white T-shirt, and a blue jacket. He also shared a picture of the famous Louvre museum amidst a beautiful sunset. The three of them are also enjoying authentic French food, such as steak, French fries, and a variety of seafood. Sutaria made special mention of her “fav girl” Alekha Advani, as the two ladies are having a wonderful time together, along with Jain. Advani also shared her picture, playfully mentioning her role as the “third wheel” with the couple.

Sutaria’s Bollywood debut film was Karan Johar’s Student of the Year 2 in 2019. She was cast in the recently released Ek Villain 2. Jain is the grandson of the legendary filmmaker Raj Kapoor and the son of Reema Kapoor and Manoj Jain. He made his debut in the film Qaidi Band in 2017 and was last seen in the 2021 film Hello Charlie. Although there hasn’t been any official confirmation from either, the duo seems to have been in a relationship for quite some time.