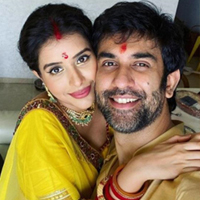 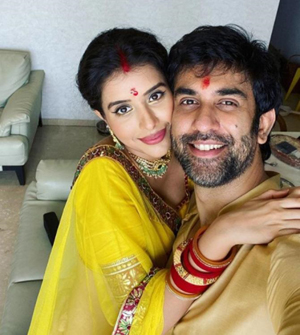 With the beginning of Navratri festivities, like everyone else, even celebrities have donned their devotional best and are wallowing in the auspicious air. Welcoming the Goddess and celebrating these happy days, small screen television actress Charu Asopa is seen with her husband Rajeev Sen as she shares glimpses of it on the social media.

The actress from popular television series ‘Akbar Ka Birbal’ was seen in her posts worshipping the goddess Maa Durga with her husband on the first day of Navratri and establishing the holy urn.

Charu is seen attired in bright yellow traditional Rajasthani attire in the pictures which she has captioned beautifully. She wrote, ‘Navratri greetings to all of you. Our pooja and Kalash have been established.’ In this photograph, Charu Asopa and Rajeev Sen are both appearing in the temple of Devi Ji.

Sushmita Sen’s brother, Rajeev is seen in the customary kurta pajama, which here is golden in color complementing Charu’s look. The couple had tied the knot on June 16, 2019. It was Sushmita who had confirmed her brother’s relationship with Charu in May, 2019. They got married in Goa as per both Bengali and Rajasthani rituals.

In the recent past however, the duo was allegedly having a rough patch in their marriage and were away from each other for almost 3 months. This was apparent to fans when Charu removed the title ‘Sen’ from her Instagram handle. The two got back after that and ever since have been posting pictures of them together on social media.

This year many other celebrities like Sharad Kelkar, Deepak Thakur, Gurmeet Choudhary, Urvashi Dholakia, Deepika Singh, took to social media to share pictures and wish Navratri greetings to all.