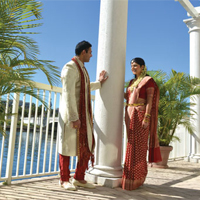 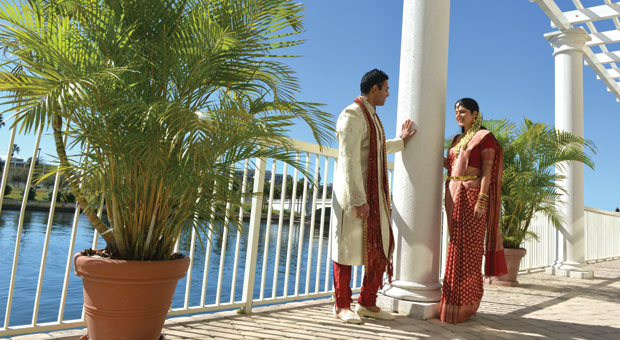 Even despite the rigors of medical school, Cupid can manage to work his magic. Anjali Shetty and Anil Ladhani met on the first day of medical school and grew close when they realized the numerous common interests they shared. They became study buddies and love slowly crept its way to them as they spent numerous hours together at the library. After four years of courtship, Anil and Anjali went on a cruise to the Bahamas. Anil planned a treasure hunt that ended on the top deck, where Anjali found a scrapbook containing pictures of all their “firsts.” She then found Anil who was down on his knees holding a diamond ring.

The wedding date was set two years after the engagement with arrangements beginning a year before the wedding. The Sheraton Tampa River walk Hotel in Florida was chosen as the wedding venue. Since Anjali and Anil were in Chicago busy with their residencies, they hired wedding planner Hameant Raghubir. He turned out to be extremely compatible with the couple’s ideas.

The sangeet/mehndi ceremony, held the night before the wedding, was a beautiful occasion. The venue was decorated in blue and green décor with LED lights with an Indian swing placed at the center of the stage, Moroccan centerpieces on the table, umbrellas on either sides of the stage, and lanterns with multicolored LED lights all around.

The Sheraton Riverview Room, where the wedding took place, is a glass enclosed waterfront room overlooking Hills borough River. Anil and his family arrived in a boat since water surrounds the hotel. Red and white were the wedding décor colors. The round mandap was a four pillar Palazzo lit with white light. Crystal curtains reflected red accent drapes at its back. Red rose petals, votive candles, fresh floral bouquet and vase with a crystal ball globe accessorized the mandap. The four page long wedding program included the couple’s photos on the cover, names of the bridal party, description of the ceremony, and special thanks to family and guests. DJ Raj Narain played “Aaj Mera Jee Karda” from Monsoon Wedding as Anil entered the wedding venue, “Tum Jo Aaye” for the bridesmaids’ entry, and “Latika’s Theme” from Slumdog Millionaire for Anjali.

The reception took place in the beautiful waterfront ballroom at the same hotel. Colors for the reception were purple and gold. The hall featured a crystal ball globe and a wreath of fresh violet hydrangeas, roses and hypericum. Numerous tables were arranged for guests and each guest had an assigned place. The highlight of the décor was a photo of the bride and groom with the quote “You don’t marry the person you can live with; you marry the person you cannot live without.” An A-shaped ice sculpture served as a dispenser for alychee martini named Anitini. The lovely venue was made even more spectacular with two textured gobos and LED lights.

Indian and American music played throughout the night. The couple attended ballroom dance classes to perfect their moves to “A Thousand Years-Part Two” by Christina Perri. They exited the reception between two lines of guests holding sparklers. They stepped into a boat and floated off into the romantic moonlit Tampa Bay Harbor. Anjali and Anil advise people to begin preparing early for their wedding so they can enjoy the whole process.