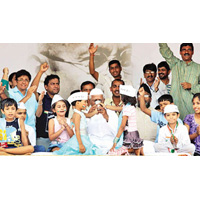 Saturday, August 27 2011 was a historic day for India. Some people may have believed that history was repeating itself, but in fact, Anna Hazare was writing a new chapter, filling page after page with momentous victories and setting precedents for the future. While a section of the population sighed with relief when Anna broke his fast and accepted a drink of coconut water offered by little children, another celebrated joyously as their pleas had been heard.

Anna’s is a Gandhian. One dedicated to the common good with no vested interest. He also followed his principles and doctrines entirely, choosing to fight his war in peace. Using his body as the vehicle and his words as his ammunition he took on the army of politicians and rallied relentlessly till he won. And although he emerged victorious, Anna has no personal gain. He took on troubles and pain stoically, standing steadfast and committed to his cause.

One look at Anna’s native village Ralegan Siddhi s enough to tell us what Anna is capable of. The village is self sufficient, and does not depend on the government for anything, be it their roads or even electricity. All arrangements have been made by the people. While none of the villagers lead extravagant lives, there is no one with anything wanting.

On August 27 2011, as Anna’s fast ended, he was back with his usual vigor and passion. Visibly energized by the people, his drink and also the acceptance from the government, Anna had many things to say, although time would not permit it. Due to swelling crowds which were getting difficult to control and some people who were also starting to faint with the heat and fatigue, Anna had to cut short his speech and make his way to the hospital where he is to spend the next few days recuperating.

Among the main points highlighted by Anna, he made a poignant mention of the fact that he noticed that several people over the country have been sporting caps reading ‘I am Anna’. Anna said that he was motivated by the surge of enthusiasm among the youth, who he believes are the power of the future. He said that if the youth continued working with the same momentum they have today, nothing can stop them or the country from reaching the the heart and intent in the right place. top. Anna also acknowledged the support that he has received from the people from over the world.

The main focus on the speech was the five points that Anna inspired people to emulate if they looked to be Anna’s of the future. Anna said that to be a true Anna, you must be able to suffer humiliation with fortitude, enjoy sacrificing, have clean, honest thoughts and character, and the conviction to do as you say. If anyone can manage to make these traits of their personality, there can be scores of Anna fighting for noble causes.

In a first for India, Anna’s fast and struggle has managed to bring together the ruling and opposing party to agree on a policy, and also rouse a nation with fervor and the spirit to want change. While everyone felt strongly about corruption and the tyranny of politics today, no one stood up to give their discontentment voice. Anna has not just unified the parliament, but the people who have come together and look for a change.

The change, however, must be brought upon by us. It is we who must decide to end corruption and live an upright life. Anna’s team made everyone at the Ramlila Maidan pledge not to take or offer bribes, and to be true to themselves and the nation. If we can all stand true, India will have a different fate.

What Anna has achieved has been truly remarkable. It did not take a team of elite thinkers or highly educated politician to bring about a change. All it took was a simple common man who had