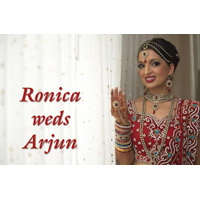 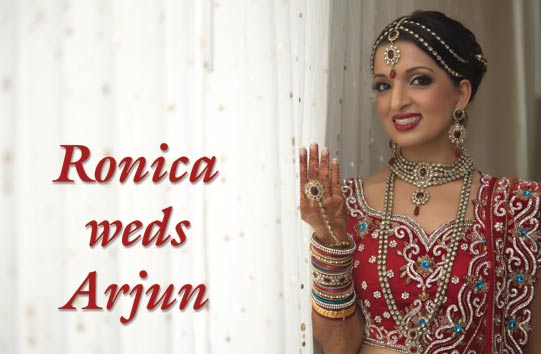 Two years after physicians Arjun and Ronica met in medical school, they realized they had much in common, including a love for the Florida Gators, hatred for libraries, and similar tastes in food. Once the realization hit home, they knew they were meant for one another.

Arjun coordinated a heartfelt proposal during a vacation trip to Orlando. Knowing that swimming with dolphins was a dream of Ronica’s, Arjun arranged for the couple to do so at Discovery Cove. After a group swim with dolphin Yoko, Ronica was given a buoy by the very same dolphin. On the buoy were the words, “Will you marry me?” Though initially speechless, Ronica managed to squeeze out a yes!

Arjun and Ronica married in December 2013. They couple chose the Orlando World Center Marriot for its beautiful ambiance and spacious ballrooms. An added bonus what the convenience of having the family, bridal party, and guests stay at the hotel to eliminate the need for additional transport.

Pre-wedding functions epitomized charm, creativity and brilliance. The Sangeet’s theme was “lotus” since the flower signifies purity and love. Tables were decorated with lotus centerpieces and mini tablas, while lotus fountains were used around the venue. Various food stations were arranged in a bazaar theme and served traditional and fusion dishes. Dessert included sugar cookies in lotus colors. Family and friends entertained with dramas, songs, dances and quawalis. Ronica and her sister performed a special dance, with the ceremony ending with a solo dance performance by Ronica.

Aqua and red served as wedding day colors. The wedding dais was encrusted with crystals, flowers and soft pink swags, making it look romantic and calming. Along the sides of the mandap, crystal globes, flowers and candles placed on a raised aisle.

Ceremony programs were handmade. Aqua and red ribbons threaded through heart shaped punch holes held the pages together. All wedding stationary, including the welcome bags and packages, featured the couple’s monogram! The music, played by a DJ, was inspired by Bollywood. Ronica entered in a dholi to the song “Heer” from Jab Tak Hai Jaan. Her sister welcomed the groom with a dance to the song “Aao Padharo.” The songs aptly set the mood for the ceremony.

The reception, also held at the hotel, featured a white dance floor embedded with the couple’s monogram as the center of attraction. Close friends and relatives were seated around the dance floor, and tables were decorated with floral bouquets and tall crystal centerpieces lit with LED lights or a stream of candles and crystal orbs filled with real petals. The dinner was an array of dishes, but the highlight were two lounges created exclusively for desserts. Smartly done textured lighting highlighted the space making it look and feel warm and inviting.

The four sided acrylic bar was sleek and stylish and embellished with LED lights, crystals and candles. Drinks were served through Albert and Alberta ice luges. Albert and Alberta is the mascot of the couple’s alma-mater, the University of Florida. Signature drinks such as the “Rowdy Reptile” and “Mr. Two Bits” were served too. The cake was a sapphire blue beauty with gold accents to match the dress of the bride. The linen at the venue was also done in the same colors.

An Indian jazz saxophonist entertained guests during the cocktail hour. At the reception, the bride’s sister and groom’s sister joined forces and sang the couple’s first dance song, “If I Ain’t Got You” by Alicia Keys. Friends performed dances, and ultimately, Arjun serenaded his new wife with “Treasure” by Bruno Mars, with friends and Ronica’s bridesmaids performing a background dance.

The couple advises would-be brides and grooms to leave no arrangements for last week before the ceremony and enjoy the celebrations without being too stressed.