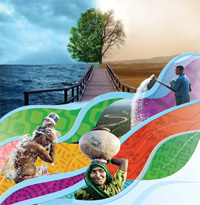 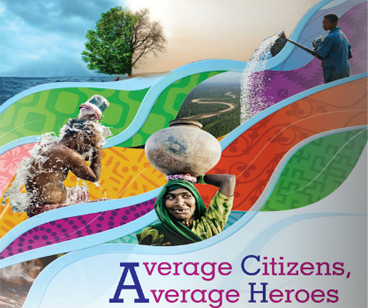 I have always been, and always will be, a devout Pixar fan. The messages they deliver, wrapped up in a colorful cast of characters (often literally – look at Sulley!), are important, touching, and without a doubt, incredibly relevant. I, for one, was star struck by The Incredible. Like everyone, I found the superheroes’ disappearance into obscurity heartbreaking, but one quote always struck me: “Where are [the superheroes] now? They are living among us. Average citizens, average heroes. Quietly and anonymously continuing to make the world a better place.” Heroes live among us. They are us. And when the time comes and a huge spherical robot (or global warming) runs amok, they stand up and do the best they can. Environmental activism isn’t a job for for them, those activists that loom so large in the public forum. It is a role for us to grow into, to take on and become. When it comes to green living, Hindu traditions should guide us to make an impact in our own, personal way.  I’d like to say that I’m special, but I, along with a majority of the teenage population, enjoy sleeping in on weekends. It’s a privilege that I enjoy now in college, but back in high school, my mother had other plans. Consequently, on Saturdays, I could often be found with an enormous pout and baggy eyes, a sure sign that I had been deprived of my beauty sleep. 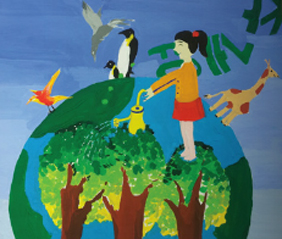 My family maintains a garden in the backyard, and it is often filled with okra, fijoas, and various other delectable treats. Everyone contributed my particular role was to dig holes for planting and everyone enjoyed the fruit of our garden when summer came. It was all natural, delicious, and most importantly, pesticide-free.  Hinduism tells us that food represents the purity of the Earth as well as the generosity and love that Mother Earth lavishes upon us. Pesticides and other such chemicals corrupt the bounty of Bhumidevi, poisoning it for ourselves and for the rest of nature. We are meant to practice ahimsa, nonviolence, and the use of pesticides leads to the deaths of countless organisms, big and small, and amounts to self-destruction as we poison ourselves out of spite, to deny nature. We live far beyond the resources that the Earth can sustain us with, and as we force every last bit of sustenance out of Mother Earth, we poison ourselves alongside the land itself. Every human being is born into debt that we spend the rest of our lives repaying. Hinduism divides this debt, this pancha-maha-yagna, into a number of categories: debt to God, to ancestors and teachers, to guests, to mankind, and to nature. We are indebted to nature for all the food, water, and resources it has provided us, and often, we don’t do enough to give back to nature, to reduce our overwhelming dependence upon it.

Perhaps the grimmest prediction of what the world will become if we continue to exploit nature can be found in Wall-E. While the adorable, somewhat unclean robot captured the hearts of billions, his lovable nature contrasted sharply with the stark landscape of Earth. Earth had given, given, given, but it had reached its limit, and that limit is fast-approaching in reality. Unlike the movie, we do not have spacecraft to flee to, nor do we have an army of robots waiting to steadily work away at the landfills and litter. We have only ourselves on the leaking boat that is our planet, and we have to hope that it will be enough.  World hunger is the largest drain, one that grows in scale daily and is caused, at least in part, by the greed of developed nations. Meat is a luxury, one we can ill afford, and every calorie of meat we produce is a reminder of another nine calories that have been wasted in producing an animal that exists only for us to slaughter.

Beyond the gross violence and inhumanity of the animals’ death, the large-scale production of meat is a crime against humanity. It is the reason why millions of people are malnourished, and it is caused by us, those who find immeasurable suffering conscionable by taste and a healthy dose of protein. Hinduism teaches us to move beyond our senses, to sacrifice our own pleasure for the benefit of the greater whole, and although factory farming isn’t going to disappear anytime soon, we can take steps to start phasing it out. We can pursue policy in government that supports more humane methods of raising livestock, and simultaneously advertise the benefits of such an alternative. We can advocate vegetarianism on a nationwide level, a job that will surely be made easier by the fact that vegetarianism is on the rise. We can’t make people’s choices for them, but we can always offer an alternative.

Hinduism is littered with heroes who paved the way to justice on the battlefield, but the heroes of today are different. Both fight for the same cause – morality, justice, and peace, but the battles of today take place in the boardrooms, presided over by men whose decisions affect the lives of millions and fought by us, the citizens who desire to make a change. Some achieve fame, but even those who don’t, who prefer the quiet of daily life, make a difference. After all, every one of us is inseparable from God, and every one of us has the power to change the world.

Biography
Aanandh Chandrasekar, 18, is a first-year chemical engineering student at the University of Texas in Austin. He is a member of the engineering leadership program, Roden, and hopes to enter the pharmaceutical industry upon graduation. He enjoys rereading Harry Potter, writing fiction, and attempting to cook.