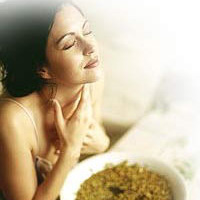 Courses like Homeopathy, Naturopathy or Ayurveda have their own set of benefits in terms of principles, diagnosis process and treatment of various complicated ailments and hence have gained tremendous importance and universal popularity all through.

Ayurveda is the oldest and most traditional holistic, integrated and physiotherapeutic system of medicine that has been practiced in India for more then 5000 years. Apart from the conventional allopathic system, there are a number of parallel or alternative streams of medicine that are practiced all over the world. Courses like Homeopathy, Naturopathy or Ayurveda have their own set of benefits in terms of principles, diagnosis process and treatment of various complicated ailments and hence have gained tremendous importance and universal popularity all through.

Among all of these, Ayurveda is the oldest and most traditional holistic, integrated and physiotherapeutic system of medicine that has been practiced in India for more then 5000 years. This branch of natural medicine represents the science of life and longevity originating in the Vedic traditions of India. It is the art of healthy living that has been helping human beings to create harmony in daily life by using the techniques of self-knowledge and self care.

Ayurveda is based on the principle of eternal life and upon the universal natural law of balancing the five elements (ether, air, fire, water and earth) that make up the physical body. When one or more of these elements go out of balance because of improper diet and life style, various diseases and mental disturbances can manifest.

The word Ayurveda is derived from the ancient Indian language Sanskrit where ‘ayus’ means life and longevity and ‘ved’ means knowledge or science. So, the literal meaning of the word Ayurveda is knowledge or science of life and longevity. Ayurveda is a science in the sense that it is a complete system. It is a qualitative, holistic science of health and longevity, a philosophy and system of healing the whole person, body and mind. This ancient Indian medicine seeks to reestablish the harmony between the body and its habitat by creating the optimum health environment.

Ayurveda is not a subject of today, but has its sources in the ancient Indian scriptures thousand of years ago. It is said that Lord Brahma, the creator of universe as per the Hindu mythology, was regarded as the first preacher of Ayurveda. Thereafter, the subject was passed on and transmitted down the generations through the ages verbally and through oral teachings, until the famous sage and avatar of Lord Vishnu – Veda Vyasa compiled the complete knowledge of Ayurveda in writing into a body of scriptural literature known as the Vedic literature.

However, the subject was not only limited or restricted to the Vedas, but were also recorded in the Aranyakas, Brahmanas and Upanishads. But, the structural presentation of Ayurveda took place between 2nd century B.C. and 10 th century A.D. These presentations were named Samhitas. The two most popular Samhitas are Charaka Samhita and Susrutha Samhita. Charaka Samhita deals with kaya chikitsa i.e. general medicine and Susrutha Samhita deals mostly with shalaya i.e. surgery.

Over the centuries Ayurveda has had a nurturing influence on ancient Chinese systems of medicine, Unani medicine, and the humeral medicine practiced by Hippocrates in Greece. Ayurveda’s focus on an individual’s holistic health rather than merely the physical body is the most beneficial aspect of Ayurvedic medicine.

Ayurveda offers reference points for managing treatment decisions specific to each case. Ayurvedic theory is profoundly useful in analyzing individual patient constitution and understanding variations in disease manifestation. This understanding that we are all unique individuals enables Ayurveda to address not only specific health concerns but also offers explanation as to why one person responds differ ently than another.

The ultimate goal of Ayurveda is to create a state of holistic health for the individual, to create, consequently, a healthy society and environment with its herbal health remedies. To attain this state Ayurveda believes one’s life must move in harmony with nature’s rhythms and its laws. Because, Ayurvedic medicine recognizes the human body is part of nature, rather a microcosm of the universe.

Ayurveda works on the principle that a perfect health condition is achievable through the psychosomatic integration in a person. According to Ayurveda, every living being in the universe is a combination of five basic elements (panchamahabhootas) – space, air, fire, water and earth. Balancing these elements is the best method to maintain health and in the treatment of diseases. 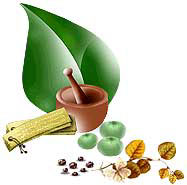 These panchamahabhootas combine into three more energy levels (doshas) – Vata, Pitta and Kapha that combinedly determines the health and the physiologic constitution of an individual. Doshas are to be seen as all pervasive, subtle entities, Vata regulates movement and is represented by the nervous system. Pitta is the principle of biotransformation and is the cause of all metabolic processes in the body. Kapha is the principle of cohesion and functions through the body fluids.

Like doshas, there are three Gunas or qualities –satwa, rajas and tamas that are essential components of the mind. At the same time, there are seven bodily tissues known as the Sapta Dhatus present in the human body that form the pillars of the body and are responsible for providing nourishment, growth and support to the body and mind. They are – rasa dhatu, rakta dhatu, masma dhatu, meda dhatu, ashti dhatu, majja dhatu and shukra dhatu. Each dhatu is governed by one of the three doshas.

The dhatus produce various waste products known as the Malas while performing metabolic processes of the body. There are three malas are purisa (faeces), mutra (urine) and sweda (sweat). Ayurveda states that a balanced condition of all doshas, dhatus and malas is key to good health and their imbalance is the cause of disease. For the proper transportation of food, dhatus and doshas – there are thirteen channels present in the body and they are known as Srotas. Any kind of blockage in these channels causes various health problems or disorders.

Ayurveda is hence regarded as a holistic system of medicine that joins together the science and philosophy in order to balance the physical, mental, emotional and spiritual components of the human body necessary for good health.

Over the last century, Ayurvedic Medicine has experienced a rebirth and has continued to evolve its holistic approach to health in accordance with modern needs and scientific advances of the day.

Today, modern Ayurveda also includes subspecialties like i) Principles of Preventative Healthcare For the Entire Family ii) Treatment of Addictions iii) Purification and Rejuvenation Treatments iv) The Ayurvedic Approach To Diet and Weight Loss v) Specific treatment plans for the diseases of Vata origin which affect the musculoskeletal system and nervous system vi) Promotion of self-healing and resistance to disease vii) Specific remedies for Male infertility and impotence as well as Female infertility and viii) Beauty and cosmetic treatments for men and women.

The materia medica of the Ayurveda, composed of the five basic elements, has been categorized according to the derivatives of these elements. They include: taste (rasa), potency (virya), taste of the digestion product (vipaka), properties (guna), specific properties (prabhava) and action (karman).

The drugs used in Ayurveda are made by several processes from vegetable and mineral raw materials. Mostly plant alkaloids are the active ingredients. India, being the originator of this effective branch of medicine, is the storehouse of all kinds of medicinal herbs that are used in Ayurvedic treatment.

Though a system of medicine very much Indian in nature, Ayurveda transcends the boundaries of limitation and are accepted all over the world as a very effective and established mode of treatment. The proliferation of the subject is not only witnessed in the application of the medicine, but also in the interest in taking up the theoretical aspects of the system as a main branch of studies. 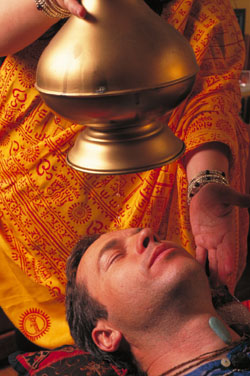 The countries which have shown interest in Ayurveda curriculum and research includes Russia, US, Japan, Australia, Netherlands, South Africa, Argentina, UK, France and Italy etc. It has also been noted that medical schools in the US wanted to introduce an Ayurvedic module and various teaching institutions in India such as Banaras Hindu University and Gujarat Ayurved University had entered into MoU’s for collaboration in the field of education and research with institutions in Japan, Australia, Italy and Argentina.

This popularity of this traditional and very Indian system of medicine lies in the uniqueness of its treatise – its focus on establishing and maintaining balance of the life energies rather than focusing on individual symptoms ; recognition of the unique constitutional differences of all individuals and therefore recommending different regimens for different types of people ; promotion of harmony between the individual and Nature by living a life of balance according to her laws ; and lastly, realization of the need for preserving the alliance of the mind and body and offers mankind tools for remembering and nurturing the subtler aspects of our humanity.

In order to achieve the two main goals of Ayurveda – i) to maintain the health of the healthy and ii) to heal the sick ~ the approach involves adopting the right diet, daily regimen, lifestyle, actions and activities. Various problems like depression, anxiety, nervousness, and insomnia are due to sick mind and body. Therefore, a balance is needed in the functioning of both mind and body for good health.

Hence, Ayurveda, as a whole, seeks to heal the fragmentation and disorder of the mind-body complex and restore wholeness and harmony to all people. It is this approach that is contributing to the growth and popularity of this ancient Indian medicine all over the world.

March 2006
How to Raise Spiritual Family