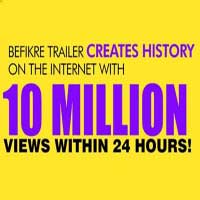 Befikre Trailer Creates History on the Internet with 10 Million Views within 24 hours!

The carefree, free spirited attitude of Aditya Chopra’s Befikre has very successfully translated with its trailer! Which is why, it has piqued curiosity and made sufficient impact to break all online records for any Hindi film with 10 million views in just 24 hours! We are happy to share this magic number with you to give an idea of its reach.

This magical number of 10 million is especially significant, despite the trailer being launched at an odd hour of midnight India time.