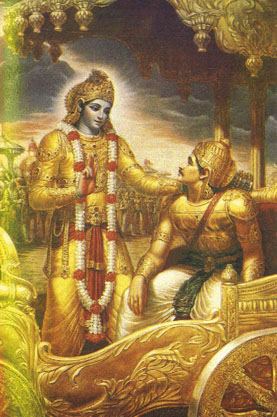 Introduction
One of the greatest contributions of India to the world is Holy Gita. Arjuna got mentally depressed when he saw his relatives with whom he has to fight. The Bhagavad Gita is preached in the battle field Kurukshetra by Lord Krishna to Arjuna as a counseling to do his duty while multitudes of men stood by waiting . It has got all the management tactics to achieve the mental equilibrium and to overcome any crisis situation. The Bhagavad Gita can be experienced as a powerful catalyst for transformation. Bhagavad gita means song of the Spirit, song of the Lord. The Holy Gita has become a secret driving force behind the unfoldment of one’s life. In the days of doubt this divine book will support all spiritual search. This divine book will contribute to self reflection, finer feeling and deepen one’s inner process. Then life in the world can become a real education—dynamic, full and joyful—no matter what the circumstance. May the wisdom of loving consciousness ever guide us on our journey. What makes the Holy Gita a practical psychology of transformation is that it offers us the tools to connect with our deepest intangible essence and we must learn to participate in the battle of life with right knowledge. There is no theory to be internalized and applied in this psychology. Ancient practices spontaneously induce what each person needs as the individual and the universal coincide. The work proceeds through intellectual knowledge of the playing field (jnana yoga), emotional devotion to the ideal (bhakti yoga) and right action that includes both feeling and knowledge (karma yoga). With ongoing purification we approach wisdom. The Bhagavad Gita is a message addressed to each and every human individual to help him or her to solve the vexing problem of overcoming the present and progressing towards a bright future. Within its eighteen chapters is revealed a human drama. This is the experience of everyone in this world, the drama of the ascent of man from a state of utter dejection, sorrow and total breakdown and hopelessness to a state of perfect understanding, clarity, renewed strength and triumph. Management has become a part and parcel of everyday life, be it at home, in the office or factory and in Government. In all organizations, where a group of human beings assemble for a common purpose, management principles come into play through the management of resources, finance and planning, priorities, policies and practice. Management is a systematic way of carrying out activities in any field of human effort. Its task is to make people capable of joint performance, to make their weaknesses irrelevant, says the Management Guru Peter Drucker. It creates harmony in working together – equilibrium in thoughts and actions, goals and achievements, plans and performance, products and markets. It resolves situations of scarcity, be they in the physical, technical or human fields, through maximum utilization with the minimum available processes to achieve the goal. Lack of management causes disorder, confusion, wastage, delay, destruction and even depression. Managing men, money and materials in the best possible way, according to circumstances and