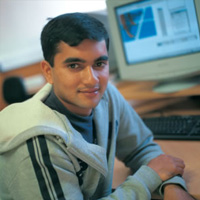 Elements of Emerging Success of Indians

India has been posting around 6% growth for a decade. It’s knowl edge proficiency has been known for a little more than that. It has been a democracy for half a century and has cherished family values for millennia. So what’s new that’s causing this new chorus of India praise? In the past six weeks a slew of columnists have been ‘discovering’ these long known virtues. John Pesek [International Herald Tribune, Feb 15, 05] cautions the G7 nations against “down playing India’s potential relative to that of China.” Economists have a poor record of predicting winning nations says Morgan Stanley’s Danial Lian. Even as they betted that Japan would lead the Pacific Century, it’s economy tottered and China arose in the Nineties. Pesek goes on to imply that the world has been into denial about China’s fragile systems – political and economic. India’s on the other hand are robust. Its “entrepreneurial vigor is more impressive than China’s”. Its well developed financial markets are fueling capital formation. “What China must build from scratch, India has up and running”. He concludes that. “Western investors ultimately could favor India over China”. Not just investors, the US government too must serenade India ,says David Kirkpatrick [Fortune, Feb 23, 2005]. He merely adds to the rising clamor for closer ties between these two countries. Typical of American sensibilities, the writer’s enthusiasm is due largely to how Citibank ATMs, Dells and other American brands are comfortingly ubiquitous in India. He also marvels how he was able to video-conference his family from a Bangalore hotel lobby using his laptop. Kirkpatrick does eventually get to the substantive part of what makes India really tick: “I would walk into an office filled with fresh-faced young people and be so struck by their energy and enthusiasm that I had to believe the infrastructure problem could somehow be overcome. The will to succeed there is so strong”. And then he declares: “I found India so enthralling that I could imagine living there someday”. How nice. Ali Al-Baghi, a former UAE minister for oil, writing in the Wall Street Journal, is more direct and pertinent about why India will be a success story: “The difference between us and a country like India is our Arab mentality. Our mentality has led us to where we are now, while the mentality of Indians has pushed them to their current high position.” He then admires: “It has achieved huge success and amazing developments in a variety of fields because it favored democracy, peace, development and is strongly against any kind of extremism. Isn’t it enough that hundreds of millions of Indians, who are mostly non-Muslims, are being ruled by a

Muslim President”. Well, you wouldn’t quite say ‘ruled’ but a pardonable error in one who doesn’t live in a democracy. By the way, is it only such people who will adore India’s democratic ways, whereas the ‘Free World’ would adore China instead and look at India only when it ripens as a market for its brands? The prestigious New Scientist is not given to such political discussion but to reporting science readably. Still, its Special Edition [Feb 19, 2005] on “India – the next knowledge superpower” carries almost nothing totally new that has not been noted widely in the last couple of years. May be our self-assurance has so grown that we no longer gloat over western raves as we did a decade ago Still and all, it is pleasing to learn how India’s space programm has focused on societal applications instead of just business ones. ISRO’s satellites are measuring water stress in crops, predicting yields, picking places to drill for water, deciding where to locate rainwater trapping check dams, mapping chlorophyll rich waters that sustain fish catches, reducing deaths due to cyclones from 10,000 in 1977 to just 900 in 1990, linking hospitals to serve remote areas and so on. Despite a lack of great business anxiety – or perhaps because of that lack-, it has been “estimated that ISRO’s projects have added between two and three times the organization’s budget to the nations GDP”. Other articles in the Special Edition highlight instances of Indian innovations and drive. There is the L V Prasad Eye Institute, Hyderabad using stem cells drawn from near a damaged cornea to repair it to grow it anew. India’s erstwhile practice of manufacturing cheap, generic copies of blockbuster drugs has made it a leader in chemistry research and spawned 9000 drug firms. One of them Bharat Biotech, has produced hepatitis B vaccine for a dollar a shot [or a twentieth of western prices] by innovating and reducing the cost of producing a crucial protein. GE’s Bangalore research team has significantly improved the efficiency of its wind turbines and its engine for Boeing’s planned 7E7 aircraft. There is news too, that’d get up the hackles of conscientious objectors: New Scientist reports on India’s decision to turn to fast breeder nuclear reactors for its future power needs, even as the world is switching them off. India believes it can succeed where others have lost their nerves. And, GM crops are alive and growing well, thank you. In March, 2002 India set up the

Genetic Engineering Approval Committee as a lightning rod to handle protesters and it has been cunningly effective. Behind all these developments— mostly good and some, disturbing— lies what is known as India’s knowledge leadership. Nandan Nilekani of Infosys says, “US students will worry that IT jobs will migrate to India and so will stop studying technical subjects… If the immigration of technical experts to the US and the supply of their graduates eventually dry up, then I can imagine the centre of gravity of innovation drifting east”. But we must again ask the question we began with: What’s new that’s causing this attention and praise? Perhaps the world has sized up India but hasn’t quite the right phrase yet that would describe what animates the Indian mind. We have two clues from recent times that might let us understand. First, when the tsunami struck on Dec 26, 2004, India facing a monumental disaster at home, nevertheless announced an instant aid of $25 million to Sri Lanka and also dispatched help to Indonesia. This, when the US lazily announced a niggardly $35 million for the whole world. Second, we learn from a New Scientist article, India has just completed “the Giant Metrewave Radio Telescope [GMRT]— world’s largest, low-frequency radio telescope and India’s biggest science project.” Located at Khodad near Pune, the GMRT consists of 30 tracking antennas, each 45m diameter. “This is Big Science on anyone’s scale”. India’s innovative engineers “created a revolutionary, low-cost design. The entire design cost $12 million”. Astronomer Paulo Freire of Cornell University, USA says, “The beauty of GMRT’s design is deeply influencing the construction of the SKA” [square kilometer array]. The purpose? GMRT will do something that reads like this: “detect a 1420 megahertz radio signal emitted by exited hydrogen gas”. Pure science with no profit-intent built in. So, what’s the connection between India’s scientific pursuit and tsunami outreach? Together, they epitomize what the Indian mind yearns for: stay open in mind, investigate and reconsider your certainties; and combine that with compassion for the human condition. Not to say, India has perfected this or is anywhere near doing so, but the Indian mind yearns for it. Indians are growing a successful economy probably because their activities don’t always make economic sense.

Elements of Emerging Success of Indians