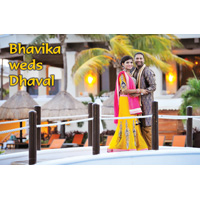 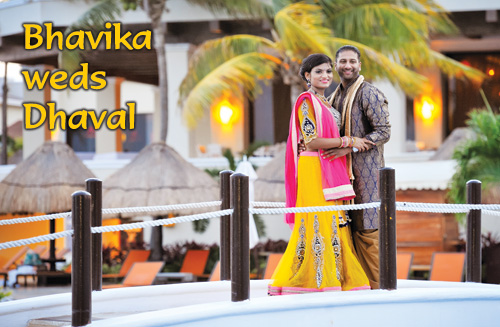 Friends played cupid to get Bhavika and Dhaval together in Little Rock, Arkansas. Once the arrow struck, the two dated two years and four months. The couple, along with friends, went on a vacation to Punta Cana in the Dominican Republic. On a lovely beach there, Dhaval arranged a romantic dinner just for the two of them. After the wonderful meal, the couple was walking back when something flashed. Bhavika turned around to find Dhaval on his knee, with a ring in hand. In a gazebo in front of them were their friends, four of them wearing blue t-shirts, each spelling one of the words – Will you marry me? On either sides of these friends stood two more buddies, wearing t-shirts printed with hearts.

With the wedding date set for May 2014, the couple had ten months to organize. They decided on a resort in Cancun Mexico as they wanted the wedding to be one big vacation for family and friends. Bhavika and Dhaval did all the planning, but had a wedding planner at the resort help them with the menus, flowers, and other requirements. They chose the resort for its expertise in hosting Hindu wedding and serving Indian meals.

The mehndi night took place on the Grand Terrace next to the swimming pool adorned with floating candles, alongside a food spread consisting of appetizers, drinks and a Mexican dinner. The color theme was orange and fuschia, and centerpieces held candles and flower petals. The pithi and Grah Shanthi were organized the next day morning and afternoon respectively, at the Bugambilias Gazebo, which offered great views of the ocean. The ceiling and entrance of the venue was draped with orange and yellow fabric. Guests were offered fresh coconut water and ice cream to help them cool off on the hot afternoon.

The next morning, the couple wed during a beachside ceremony. Chairs were red and gold, the tent was gold, and the mandap was royal red. Walkways were adorned with a candelabrum done in crystals and red roses. The wedding programs were designed to open as a fan and inscribed with the quote “Yeh zindagi chal toh rahi thi…per tere aane se maine jeena shuru kiya.” The tables had red and black sunglasses with the couple’s names on them along with the wedding date. DJ Josan played music at the wedding. Bhavika walked in to“Ek Ladki Ko Dekha Tho” from 1942: A Love Story and the bridesmaids walked in to “Kaise Mujhe Tum” from Ghajini. For transportation to and from the resort, a shuttle bus was used, and for movement within the resort, they used golf carts. The groom arrived on a horse with his baraat on the wedding day.

The cocktail and social hour was held in the foyer of Sunrise. The reception that followed was beautiful with a color theme of royal blue and white. Tables were done in royal blue and silver runners, and the chairs were all royal blue. The backdrop was in white with crystal curtains. The stage included a couch for the couple and was illuminated with blue LED lights. Two types of centerpieces were used – one had three cylinders with blue flowers with crystals and floating candles, and the other had blue and white roses in crystal vases. The venue was illuminated with blue ambient lighting.

A cake table was arranged next to the dance floor. The cake was personalized with a topper depicting the bride and groom clad in wedding outfits. The DJ played Hindi music with the dhol player. Bhavika and Dhaval made a unique entry to the reception. They had a few couples act out a few scenes depicting their love story and then made a grand entrance. Cousins performed on the occasion.