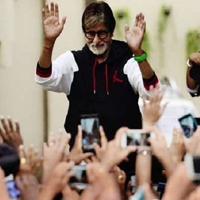 Megastar Amitabh Bachchan has crossed a fan following of 24 million on Twitter, retaining his position of the most followed Indian actor on the micro-blogging site.

The 74-year-old actor is ahead of superstars like Shah Rukh Khan (22.6 million), Salman Khan (20.7 million), Aamir Khan (19.3 million) and Bollywood stars Deepika Padukone and Priyanka Chopra, who have 16.8 million and 15.8 million followers respectively.

Bachchan, who joined Twitter in 2010, expressed his excitement through a post and shared the news along with a picture of himself sporting a yellow sweater.