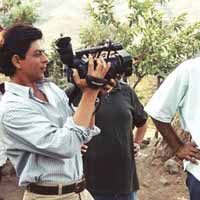 Shah Rukh Khan has thanked director Ashutosh Gowariker for helming the 2004 critically acclaimed film “Swades”, which featured the superstar in the lead role.

As the film clocked 12 years today, the 51-year-old actor posted a sweet message on Twitter, praising the entire cast and crew of the movie.

“Yeh jo Des hai mera Swades hai mera… Can’t thanks Ashutosh enough for such a lovely film. Whole cast/crew had such faith in goodness and Indianness,” he wrote.

“Swades”, inspired by a true story, was a remake of Kannada movie “Chigurida Kanasu” with Shiva Rajkumar in lead role.