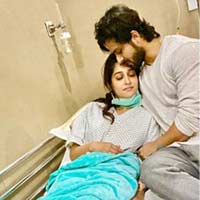 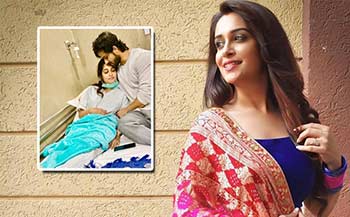 One of Indian TV’s beloved bahu, Dipika Kakar has been admitted to the hospital, revealed her husband Shoaib Ibrahim. The actor and doting husband, Shoaib took to Instagram to share the news with the fans while praying for her speedy recovery.

In the photograph that Shoaib shared on social media, Sasural Simar Ka actress can be seen lying on the hospital bed. He captioned the photo with, “Bas ab jaldi theek ho jao yaar bachcha (Please recover fast baby). Pray for her speedy recovery.”

Dipika is currently working in Star TV’s Kahaan Hum Kahaan Tum, in which she plays TV actress Sonakshi Rastogi. Kahaan Hum Kahaan Tum’s producer Sandiip Sikcand confirmed the news of Dipika’s hospitalization, and said, “Dipika was hospitalised on Thursday. She is suffering from high fever and bad cold, owing to a viral infection. It’s in the air these days.” When asked about Dipika missing from the shoot, Sandiip added, “We have a decent bank of episodes and there is nothing to worry, as the show is on track. For now, we just want her to recover completely. Nothing is more important than health.”

Many celebs from the television industry commented on Shoaib’s posting wishing a speedy recovery to Dipika, including Kavach 2 actress Deepika Singh.

Dipika made her television debut with Neer Bhare Tere Naina Devi in 2010. She also appeared in Agle Janam Mohe Bitiya Hi Kijo, before she got her big break as the female lead in Sasural Simar Ka through which she became a household name by playing the character of Simar Bhardwaj. She also participated in the reality show Bigg Boss 12, hosted by Bollywood actor Salman Khan, and emerged as the show’s winner.