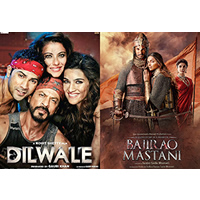 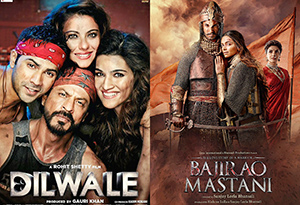 According to renowned trade analyst Taran Adarsh and official numbers shared by Red Chillies Entertainment, Rohit Shetty’s Diwale made Rs.21 crores on Friday and Rs.20.09 crores on Saturday, respectively. Earnings on Sunday  added Rs.24 crores to the total weekend total and made it an impressive Rs.65.09 crores. The movie minted Rs.56 crores additionally overseas.  On the other hand, Sanjay Leela Bhansali’s Bajirao Mastani made Rs.12.80 crores and Rs.15.52 crores on Friday and Saturday. Sunday earnings totaled Rs.18.45 crores, taking its total to Rs.46.77 crores. The film has also made about Rs.29.85 crores in the overseas market.

Wazir on verge of release 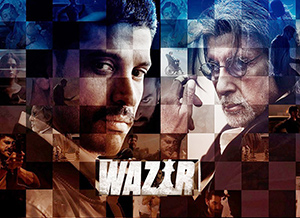 The Amitabh Bachchan – Farhan Akhtar film Wazir, is the first Bollywood release of 2016. The film hit theaters early January 2016. Directed by Bejoy Nambier, the film revolves around the story of two unlikely friends – a grief-stricken ATS officer (Danish Ali) and a paralyzed chess grandmaster (Amitabh Bachan). Danish Ali, aka Farhan Akhtar, who is grieving his daughter Noorie’s death, gets shot in a gunfire exchange. His wife Ruhana is played by Aditi Rao Hydari.

During Danish’s suspension, he meets former chess master Omkarnath/Panditji played by Amitabh Bachchan. The wheelchair bound chess champ’s daughter Nina dies mysteriously. Panditji approaches Danish to investigate his daughter’s death case. During this, Panditji is attacked by a mysterious character calledWazir. Who is this Wazir? And how will the story further unfold? Go find out in your nearest theaters.

Deepika Padukone spotted at a Jain temple in Rajasthan 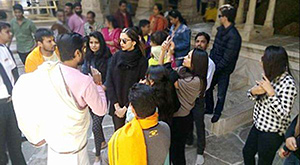 Deepika Padukone was spotted recently with a bunch of girlfriends at the Jain temple in Ranakpur, near Udaipur, in Rajasthan. Deepika was seen draped in a black shawl and wore dark glasses to avoid paparazzi. She was reportedly in Rajasthan to attend a childhood friend’s bachelorette party.

Though Deepika looked like she was very miffed with the entire incident of being spotted and photographed, onlookers found the incident very interesting and soon a large crowd gathered to get a glimpse of their favorite star. Reportedly, Deepika was found keenly listening to the tourist guide. She seemed to be interested in the history of the temple. 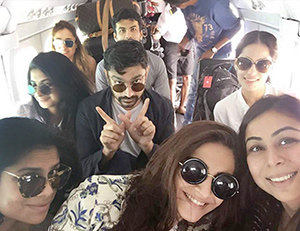 Bollywood actress Sonam Kapoor, daughter of Anil Kapoor, began New Year celebrations in the Maldives with her friends. The actress took to social media to post pictures from her celebratory holiday for her fans around the globe.

2015 has proven to be a mixed bag for Sonam Kapoor with her film Dolly Ki Doli failing at the box office andPrem Ratan Dhan Payo proving to a blockbuster at the box office. Her next venture is Neerja, where she will plays flight attendant Neerja Bhanot, who gave her life saving passengers on a hijacked plane. 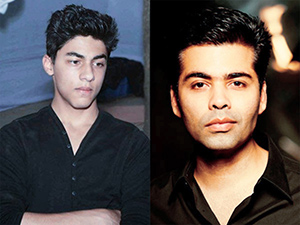 Karan Johar and Shah Rukh Khan have always been besties, but the director now claims that he has beaten the competition on launching King Khan’s eldest son, Aryan Khan, when he is ready to step into Bollywood.

The Director stated in a recent interview that King Khan is beyond family to him. He added his equation has gone beyond only SRK now. Karan Johar wants to be the first to launch Aryan. Karan even credits his success in Bollywood to King Khan and Mr. Aditya Chopra. 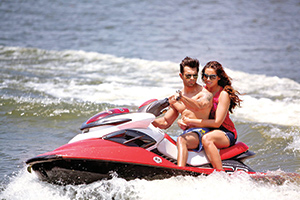 Rumors that Alone actress Bipasa Basu and her costar Karan Singh Grover are in relationship have around for months. Though both actors have never really owned up to their relationship, they have been spotted together on various occasions. The duo was first spotted together holidaying and the rumor mill has been getting its share of fuel from the pair since. Be it the walk together for award shows, going on private dinners, or the latest gym workout video.

Recently, the duo posted photos of their holiday in the Maldives. The duo was reportedly celebrating Bipasa Basu’s birthday. The pictures range from single clicks of both actors to clicks of Karan Singh Grover and his rumored Lady Love.