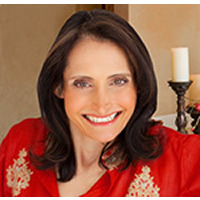 Approach anxiety is one of the most common feelings that stop a guy from talking to a woman they are attracted to – or flubbing the encounter if they do. I encourage guys to throw the cheesy pickup techniques out the window and really communicate. Here are five of the most effective ways to do it:

1. It Starts Non-Verbally
The old story about eyes meeting across a crowded room is a classic for a reason. Just about all communication begins non-verbally, and you can get a sense of whether a woman will be receptive to talking with you before walking over.
Start by catching her eye and smiling; if she meets your gaze and smiles back, it’s likely an invitation to approach and get to know her better.

2. Find On-Site Conversation-Starters
One of the best inroads to striking up rapport with a stranger is with a relevant, in-the-moment, conversation-worthy topic.
If you see a woman you’d like to talk to, scan the area for something unusual that you can casually bring up to her.
If a guy is acting ridiculously off in the distance, you could point to him and say, “Hey, you should really keep your boyfriend on a shorter leash!” You’ll likely get a laugh and have an inroad to further conversation.

3. Make Use of Overheard Comments
If you’re sitting within earshot of an interesting woman as she’s talking to friends, listen for key elements in the conversation that you know something about.
Use this information to your advantage if you get the chance to talk to her, or be direct by politely approaching and saying something like, “Excuse me, I couldn’t help but overhear you talking about The World Cup… I’m a huge soccer fan!” Chat for a bit about that, then ask for her number. You’ll both know you already have something in common for your first date!

4. Ask Her Opinion
Use relevant cultural trends, current events or personal stories as a way to start a conversation.
Asking her opinion is a great way to get the conversation flowing to see if you’re compatible. An example might be, “Hey, I was just talking to a friend earlier today and he seems to think _______, but I don’t agree. What’s your take?”

5. Be Genuine
Finally, the most important element of communication success with women is being genuine.
Be yourself! You want her to like you for you anyway, so bring out what’s cool about you as you’re talking and see if she responds. If she doesn’t, she’s probably not a good match anyway.

Jasbina Ahluwalia, Matchmaker & Dating Coach has pioneered an approach to matchmaking, which blends the best of The East and West.

She is an Indian-American Attorney-turned-Entrepreneur, Relationship Expert, Radio Show Host and Matchmaker/Dating Coach. She is the Founder & President of Intersections Match by Jasbina, the only Premier Matchmaking & Dating Coaching Firm for Indian Singles in the U.S., Canada & the U.K. Jasbina previously practiced law in San Francisco and Chicago. She earned her B.A/M.A. in Philosophy from Vanderbilt University, and JD from the University of Michigan Law School.

To learn about Intersections Match by Jasbina, visit – www.IntersectionsMatch.com or email info@intersectionsmatch.com.